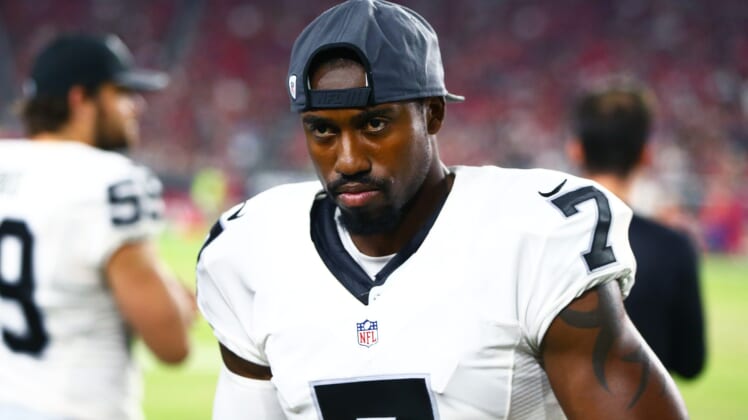 Oakland Raiders punter Marquette King is making a name for himself for being quite the entertainer along with featuring a booming leg.

He comes up with a new dance to fit each opposing team every week. Many people love his routines.

But apparently Cleveland Browns offensive tackle Joe Thomas is not a big fan. He posted a message on Twitter after Oakland’s big win over the Denver Broncos in Week 9 that indicates he’s less than tickled by King’s routines.

If your punter celebrates like this, you should be penalized. @nflcommish pic.twitter.com/F6GBMi8aVb

The tweet didn’t get widely circulated on Twitter. But King finally saw it on Friday and responded with a tweet of his own, which has since been deleted. Thankfully, we captured the image before it was taken down.

Here's what Marquette King tweeted, then deleted, in response to Joe Thomas. pic.twitter.com/ac9Jw0mIco

We have every reason to believe this message was in direct response to Thomas because King sent a message to Terrelle Pryor, who defended his former Raiders teammate.

No that's my bro. He loves the game. https://t.co/wQfHJEjiyF

Good lookin out @TerrellePryor keep holdin it down out there! See u soon…

The Raiders and Browns don’t play against one another this year. That’s a darn shame.

It’s going to be interesting to see what kind of dance routine King has planned for Oakland’s game in Mexico City against the Houston Texans. He told Deion Sanders, via Snapchat after the Broncos game, that he might have to set up something for the locals. We can’t wait to find out what he has in store.