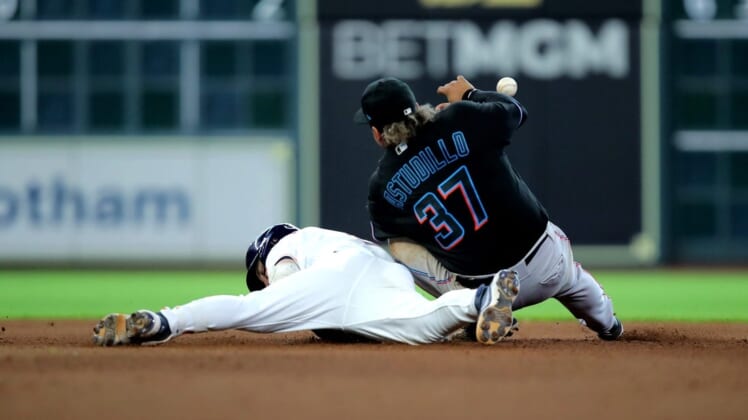 Braxton Garrett pitched effectively into the sixth inning and the visiting Miami Marlins parlayed a three-run second inning to a 5-1 interleague victory over the Houston Astros Saturday.

Jon Berti had two RBIs for the Marlins, who their fifth straight game.

Garrett (1-1) surrendered a baserunner in each of his innings of work yet kept the scuffling Houston lineup in check, allowing one unearned run on six hits and one walk with five strikeouts over 5 2/3 innings. After surrendering one-out hits to Michael Brantley in the first inning and Kyle Tucker in the second, Garrett retired the ensuing two batters to escape those frames unscathed.

Astros catcher Martin Maldonado singled leading off the third but was erased trying to stretch that hit into a double, cut down by Marlins left fielder Luke Williams. Yuli Gurriel smacked a one-out single in the fourth but was stranded there, but the Astros finally broke through in the fifth when Jose Altuve drove in Jeremy Pena, who reached on an error, with a two-out double.

The Astros loaded the bases with no outs in the seventh against Marlins right-hander Anthony Bass only for Brantley to strike out before Bregman hit a low line drive that Bass snagged before throwing to first baseman Jesus Aguilar, doubling off Altuve to snuff the threat. Houston has dropped four of the opening five games of this six-game homestand.

Pena endured a forgettable second inning defensively, handcuffed by an Aguilar leadoff single before his fielding error allowed Nick Fortes to each with one out. Astros left-hander Framber Valdez (6-3) then walked Willians Astudillo and Bryan De La Cruz in succession, with Cruz forcing home Aguilar. Williams followed with an RBI single to left field that just eluded Pena.

Valdez allowed a run-scoring groundout to Berti in the second and a fielder’s choice grounder to Miguel Rojas in the third that plated Jorge Soler. He surrendered four runs (two earned) on four hits and three walks with six strikeouts over six innings, ending his streak of consecutive quality starts at eight.