Marketa Vondrousova stopped No. 2 seed Naomi Osaka’s bid for a gold medal in her home country with a 6-1, 6-4 win in the third round Tuesday at the Tokyo Olympics.

The unseeded Czech struck four aces, saved four of five break points and finished with just 10 unforced errors. Osaka, competing in her first event since withdrawing from the French Open in May, posted 32 unforced errors and lost her serve five times in the 68-minute match at Ariake Tennis Park.

“I’ve taken long breaks before, and I’ve managed to do well,” Osaka said. “I’m not saying that I did bad right now, but I do know that my expectations were a lot higher.” 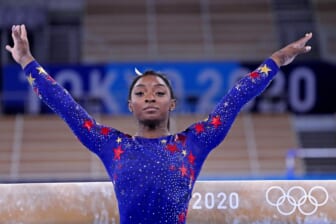 The other quarterfinal matches in women’s singles are: No. 4 seed Elina Svitolina of Ukraine vs. Italy’s Camila Giorgi; No. 7 Garbine Muguruza of Spain vs. No. 15 Elena Rybakina of Kazakhstan; and No. 9 Belinda Bencic of Switzerland vs. No. 13 Anastasia Pavlyuchenkova of Russia.