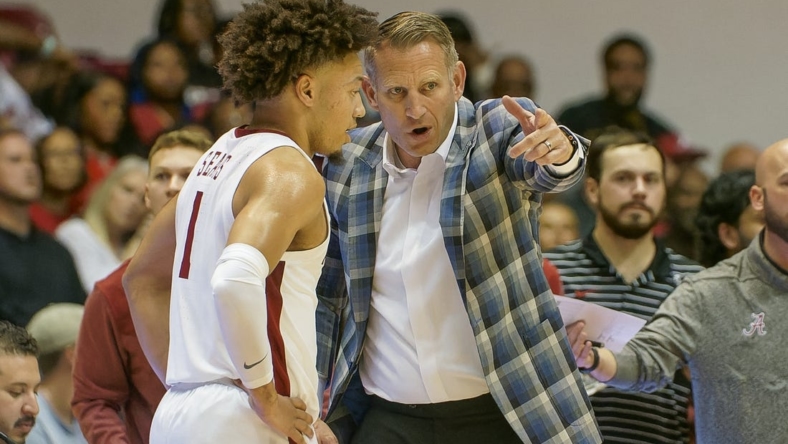 Rylan Griffen scored 16 points and Jaden Bradley had 10 as the Crimson Tide improved to 2-0 with a pair of games remaining in their home state before a test against Michigan State on Nov. 24 in the Phil Knight Invitational at Portland, Ore.

Shiloh Robinson scored 11 points and Brody Peebles had 10 for Liberty (1-1), who was facing its first Division I opponent after opening the season with an easy victory over Regent of the National Collegiate Christian Athletic Association.

The Flames, who were projected to win the ASUN by coaches and media, were held to 25.9 percent shooting in the second half as the Crimson Tide pulled away for the victory.

With Alabama head coach Nate Oats looking for improvement after a mediocre shooting night in the season opener against Longwood, the Crimson Tide shot 51.9 percent from the field and 45.5 percent (10 of 22) from 3-point range.

After a back-and-forth opening seven minutes, Alabama took the lead for good at 15-14 with 12:59 before the break on a pair of free throws by Noah Gurley.

The Crimson Tide shot 46.2 percent from 3-point range in the first half, one game after making just three total 3-pointers and shooting 10.7 percent from deep against Longwood. Alabama had a 40-31 lead at the break.

After leading by double-digits on two occasions in the first half, Alabama went up by 20 for the first time at 62-42 on two free throws from Charles Bediako.

An 18-7 run midway through the second half put Alabama up by 30-plus for the first time at 80-49 on a layup from Jaden Bradley with 5:42 remaining. The advantage never was under 30 the rest of the way.