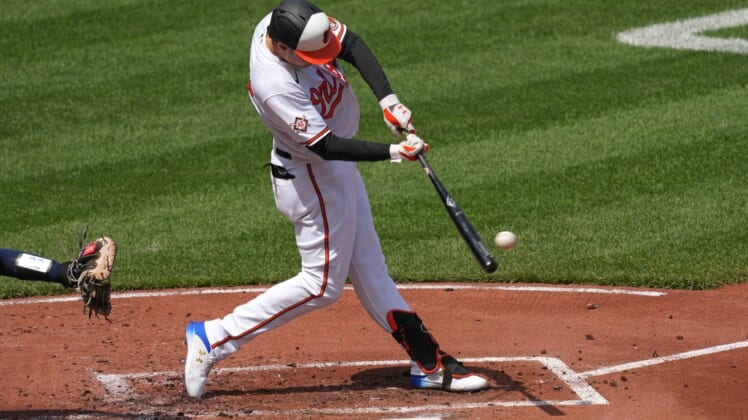 J.P. Crawford’s two-run double broke a tie as the Seattle Mariners rallied to defeat the host Baltimore Orioles 4-2 in the seven-inning opener of a doubleheader Thursday afternoon.

Mariners left-hander Marco Gonzales (1-1) overcame a shaky first inning to get the victory. Gonzales allowed two runs on three hits in five innings, with two walks and five strikeouts. Right-hander Kendall Graveman retired the side in order in the seventh for his second save.

The Mariners took the lead in the sixth off left-hander Tanner Scott (0-2).

Jose Marmolejos walked on four pitches and was replaced by pinch-runner Braden Bishop. Scott caught Luis Torrens and Taylor Trammell looking at called third strikes on 3-2 counts before Dylan Moore ended an 0-for-17 slump by grounding a single into left field. Crawford then grounded a double down the right-field line, scoring both runners.

Gonzales threw 34 pitches in the first inning before settling in.

With two outs in the first, Gonzales walked Maikel Franco. Mancini then hit a 2-2 pitch deep over the wall in straightaway center field. Pedro Severino and Ryan Mountcastle followed with singles before Gonzales got Ramon Urias to foul out to first baseman Marmolejos to end the threat.

Gonzales retired 10 batters in a row before walking Freddy Galvis on a 3-2 count leading off the bottom of the fifth.

Orioles right-hander Matt Harvey resembled the “Dark Knight” of old for the first four innings, hitting 96 mph on the radar gun and allowing just one hit — a broken-bat blooper by Torrens that went off the end of the glove of second baseman Urias in the second inning.

But Harvey couldn’t make it through the fifth.

With two outs, Sam Haggerty grounded a sharp single into right field and stole second. Haniger then hit a 1-1 pitch deep into the grandstands in left-center field to make it 2-2. Ty France reached on a fielding error by shortstop Galvis and that was it for Harvey, as manager Brandon Hyde elected to bring in Scott to face Kyle Seager.

Scott got Seager to ground out to first to end the inning.