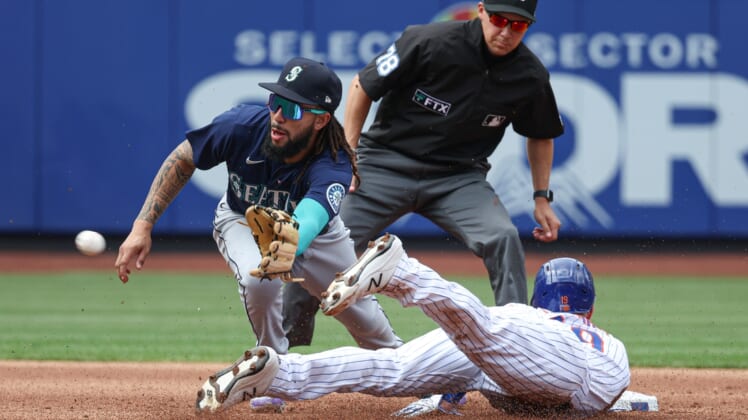 Cal Raleigh hit the tie-breaking two-run homer in the sixth inning and Julio Rodriguez collected a career-high four hits on Sunday afternoon for the visiting Seattle Mariners, who became the first team to beat the New York Mets in a series this season by withstanding a furious ninth-inning rally to earn an 8-7 win.

The Mariners took two of three from the Mets to improve to 5-9 this month. The Mets lost a series for the first time in 11 tries this season — the longest stretch to open a season in franchise history.

The Mets looked like they might extend their streak when they responded to a three-run fourth inning by the Mariners by scoring four runs in the bottom half off Robbie Ray (4-3) via two-run triples by J.D. Davis and Brandon Nimmo — the first time in franchise history New York has collected multiple RBI triples in an inning.

But Rodriguez led off the sixth with a line drive homer off Chasen Shreve (1-1). Abraham Toro singled one out later and Raleigh hit a two-out homer to right off Drew Smith.

Rodriguez added an RBI single in the seventh. He also singled in the first and eighth. The 21-year-old rookie had two three-hit games earlier this month.

Raleigh hit into a run-scoring double play in the third before the Mariners went ahead in the fourth on Mike Ford’s two-run single and Toro’s sacrifice fly.

After a quartet of Mariners pitchers retired 14 straight batters between the fourth and ninth, the Mets nearly came all the way back in the ninth. Eduardo Escobar, mired in a 1-for-30 slump, tripled off Drew Steckenrider with one out and scored on Jeff McNeil’s single. Patrick Mazeika singled up the middle before Brandon Nimmo’s double down the vacated third base-line scored McNeil and sent Mazeika to third.

Diego Castillo then struck out Starling Marte and intentionally walked Francisco Lindor before whiffing Pete Alonso on a 3-2 slider to leave the bases loaded and earn his second save.

Lindor homered in the first.

Ray allowed five runs on five hits and three walks while striking out nine over six innings. Mets starter Carlos Carrasco gave up four runs on eight hits and one walk with two strikeouts over 4 1/3 innings.