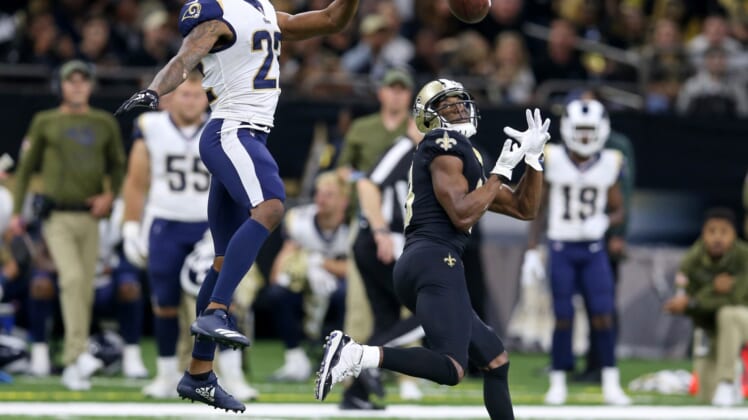 Los Angeles Rams cornerback Marcus Peters has come under fire in his first season with the team. And for good reason. He continues to stink up the joint on a weekly basis. Last week, it came in the form of giving up this long touchdown to Saints wide receiver Michael Thomas.

In responding to Saints head coach Sean Payton’s assertion that he was happy with the matchup between Thomas and Peters, the Pro Bowl cornerback responded in kind.

“Tell Sean Payton to keep talking that s**t. “We’ll see him soon…and then have a nice bowl of gumbo together,” Peters told reporters on Thursday.

You can check the video out here.

It’s obvious Peters is not in the best of moods after his struggles through the first half of the season. But Payton wasn’t necessarily shading the cornerback. He was talking more about a receiver in Michael Thomas who has now caught nearly 90 percent of the passes thrown in his direction on the season.

As it relates to Peters, he’s yielding a 140-plus quarterback rating when targeted and has given up the most touchdown passes (six) on the season.

With both the Saints and Rams having just one loss on the season, we might see a rematch of Week 9’s game come January. If so, it could be a popcorn-worthy time.