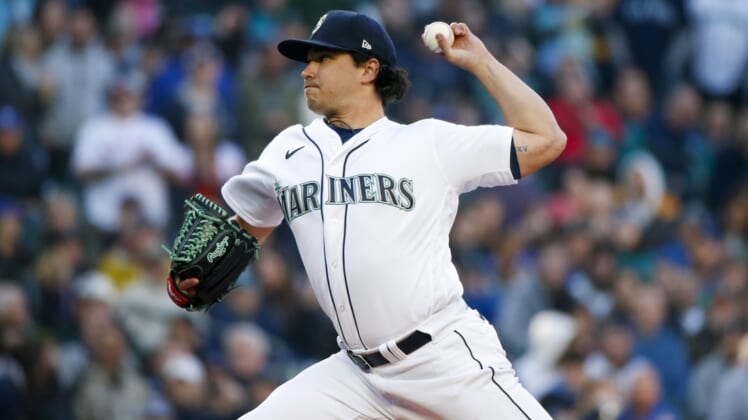 Eugenio Suarez added a two-run homer in the eighth inning to cap the victory.

Gonzales (1-1) allowed one run on four hits, with no walks and six strikeouts.

The only run the left-hander gave up came in his final inning. With one out in the seventh, reigning American League batting champion Yuli Gurriel doubled into the left-field corner – the ball hitting the chalk on the foul line – and scored on Jose Siri’s two-out, broken-bat single to center.

Frazier led off the bottom of the first by grounding right-hander Jake Odorizzi’s first pitch into right field for a single. Frazier advanced to second on Ty France’s slow roller to shortstop and scored on Jesse Winker’s line-drive single to left.

The Mariners tacked on two runs in the fourth. With two outs, Julio Rodriguez walked and Tom Murphy lined a single to left. Frazier then tripled into the gap in right-center field to make it 3-0.

The Mariners knocked Odorizzi out of the game in the fifth. Winker and Mitch Haniger led off the inning with singles and J.P. Crawford grounded into a force out, putting runners on the corners. Suarez greeted reliever Bryan Abreu with a run-scoring groundout to extend the lead to 4-0.

Odorizzi (0-1) allowed four runs on eight hits in 4 1/3 innings, with three walks and one strikeout.

With one out in the sixth, Murphy walked and Frazier grounded a single to right, with Murphy taking third. France lined a two-run double to left, giving Seattle a 6-0 advantage.

The Mariners scored their three more runs in the seventh. Crawford singled and Suarez walked, with both runners advancing on a balk by Pedro Baez. Jarred Kelenic hit a sacrifice fly to center and, after Murphy walked with two outs, Frazier hit a two-run double off the base of the wall in right field.

Crawford was hit by a pitch with one out in the eighth and Suarez took Ronel Blanco deep to right.