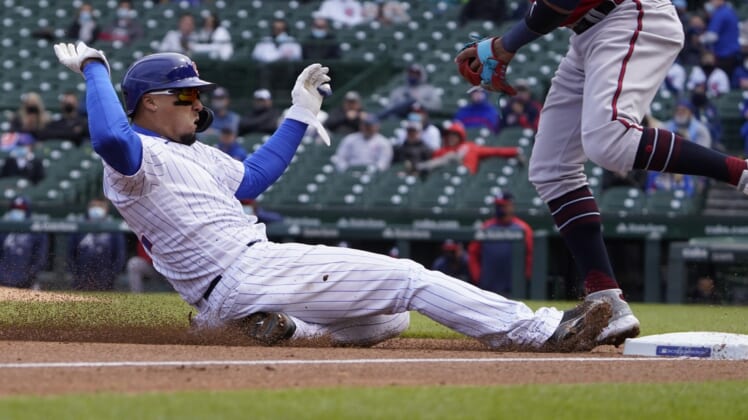 Marcell Ozuna had three hits and an RBI, Ronald Acuna Jr. delivered a two-run single and five relievers combined on 4 1/3 shutout innings to boost the visiting Atlanta Braves to a 5-2 victory over the Chicago Cubs on Friday afternoon.

Chicago went 0-for-8 with runners in scoring position and struck out 12 times while losing for the fifth time in six games. Joc Pederson batted with the bases loaded as the potential winning run in the ninth but whiffed against Will Smith to end the game.

Kris Bryant came to the plate as the tying run with one out in the bottom of the seventh, but grounded into an inning-ending double play against Josh Tomlin (2-0).

Smith walked three and struck out three in the ninth to earn his third save.

Willson Contreras had two hits for the Cubs, including a solo home run in the fifth.

Eric Sogard hit a sacrifice fly in the second inning to give the Cubs a 1-0 advantage, but Chicago starter Zach Davies (1-2) couldn’t protect the lead for long.

Travis d’Arnaud tied the game with an RBI single in the third before the Braves created distance with a fourth-inning rally that featured a two-run single from Acuna and a run-scoring infield single by Ozuna.

Smyly was scratched from his scheduled start before the game and placed on the 10-day injured list with left forearm inflammation, with Wright recalled from the club’s alternate training site. Braves manager Brian Snitker told reporters the organization hopes Smyly will miss just one start.

Counterpart Davis Ross, meanwhile, was mum about everything after participating in early media availability. Ross served a one-game suspension stemming from a hit-by-pitch incident during Tuesday’s game at Milwaukee but spoke to reporters before the game.

Braves outfielder Ender Inciarte exited in the fourth inning after injuring his left hamstring while running the bases. Ozzie Albies was removed after he was hit by a pitch on the knee in the ninth.