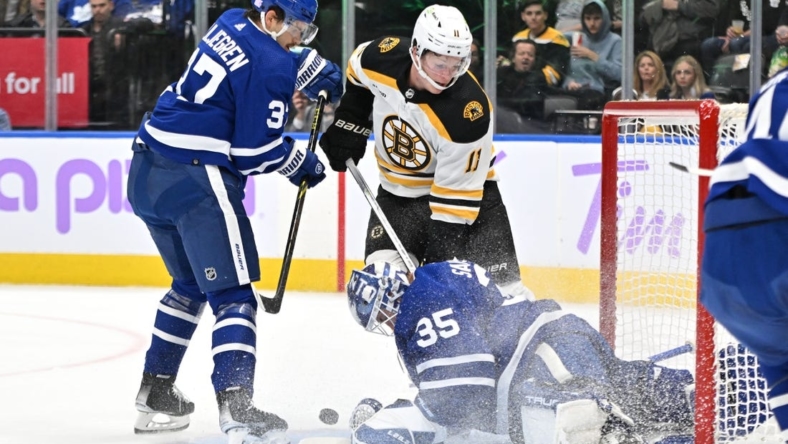 Mitchell Marner added two assists for the Maple Leafs, who have won two straight after losing four in a row.

Ilya Samsonov made 13 saves for the Maple Leafs in the first two periods. Samsonov did not come out for the third period because of a knee injury and was replaced by Erik Kallgren, who made seven saves.

Brad Marchand scored for the Bruins, who lost for just the second time in their first 12 games.

Matthews scored at 7:19 of the first period, tucking in the puck from beside the left goal post. Michael Bunting, who kicked the puck to Matthews behind the net, and Marner had assists.

Toronto had an 11-7 advantage in shots on goal after the first period.

John Tavares hit the crossbar with a shot early in the second period.

Marchand scored on a penalty shot with a nifty shoulder fake and backhand at 4:59 of the second period. The penalty shot was awarded when Marchand was tripped by TJ Brodie while on a breakaway during a Boston power play. It was Marchand’s fourth goal of the season and his 800th career point.

Matthews scored his sixth goal of the season from in front of the goal during a power play at 14:07 of the second. William Nylander circled behind the net to set him up. Marner also had an assist. Jake DeBrusk was serving a holding penalty.

The Maple Leafs led 26-14 in shots on goal after two periods.

After the Bruins killed off two penalties early in the third, they came close to tying the game when David Pastrnak hit the post with a shot.

Toronto survived two consecutive Boston power plays at 8:44 and 11:30 of the third.

Ullmark was removed for an extra attacker as the final minute of the third period approached. Kallgren and the Maple Leafs were able to hold off the Boston onslaught.