Maple Leafs’ Auston Matthews to have hearing with NHL 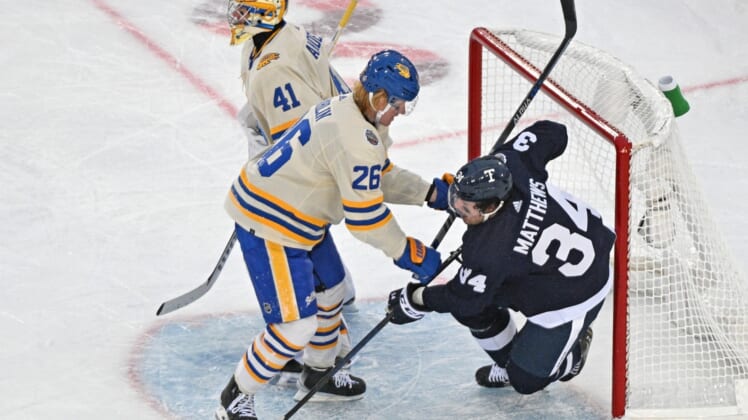 Toronto Maple Leafs forward Auston Matthews will have a hearing with the NHL’s Department of Player Safety on Monday following his cross-check on Buffalo Sabres defenseman Rasmus Dahlin during the Heritage Classic.

Dahlin initially cross-checked Matthews to the ice in the Sabres’ crease before the latter responded with one of his own at 14:55 of the third period of Buffalo’s 5-2 win on Sunday in Hamilton, Ontario. Matthews’ stick caught Dahlin in the neck and head area, which caught the attention of players from both teams.

“You’re just battling in front of the net,” Matthews said after the game. “I felt like I kind of rode up his shoulder and his shoulder pack rolled up a little bit. That’s hockey; you’re competing out there.”

The two players each were assessed a minor penalty for cross-checking on the play.

A two-time Lady Byng Trophy finalist, Matthews has no prior history of supplemental discipline from the league.

Matthews, 24, has an NHL-best 45 goals this season. His 77 points are six shy of Edmonton Oilers captain Connor McDavid and Florida Panthers forward Jonathan Huberdeau for the league lead.

Matthews is riding a five-game goal and point streak, during which he has tallied nine times.