After 22 months out of the ring, it has been announced that Manny Pacquiao will be making his long awaited return August 21 when he faces IBF and WBC welterweight champion Errol Spence Jr in Las Vegas, Nevada.

Pacquiao confirmed the big news of his bout with Spence on Twitter:

“Pac-Man” was one of two rumored names to be Spence’s next opponent. WBA champion Yordenis Ugas was said to be in negotiations to fight Spence, but no further updates came in the months that followed.

For years, boxing fans and pundits have clamored to see Errol Spence Jr. fight WBO champion Terence Crawford. However, both men have now said that they no longer want or need to fight each other, saying they want to move on to bigger and better things.

Pacquiao has not been in the ring since July 2019, when he beat Keith Thurman to win the WBA Welterweight championship, thereby handing Thurman his first professional loss. The 42-year-old will look to become the oldest unified welterweight champion in boxing history and the oldest active world champion.

Spence has been unified WBC and IBF welterweight champion since September 2019 when he beat Shawn Porter by split decision. Less than a month after the fight, Spence was in a near-fatal car crash due in part to being under the influence of alcohol. He was charged with a DWI and received probation.

This past December, Spence returned to the ring for the first time since his accident, successfully defending his unified championships against Danny Garcia. Thus, there’s even more intrigue to this showdown beyond the obvious appeal of Pacquiao’s comeback. 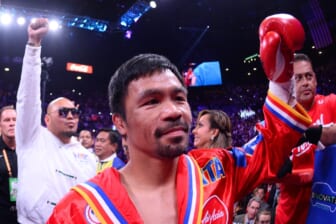 Manny Pacquiao is always a dangerous fighter. He’s continued to face quality opponents — and given them the biggest test they’ve seen in their careers. Pacquiao’s quickness and power has not deteriorated with age as he continues to press his opponents aggressively engaging in trades to great success.

Meanwhile, Errol Spence Jr. is not only the top welterweight in the world, but he is one of the top pound-for-pound fighters in boxing today. He is very versatile, able to engage with his opponents or put forth a technically sound performance to avert oncoming attacks, followed by well-timed counters.

This will be an intriguing matchup with questions of Pacquiao’s conditioning due to a two-year layoff and Spence’s ability to handle Pacquiao’s aggressive style in question. This fight could easily be a Fight of the Year contender when all is said and done.