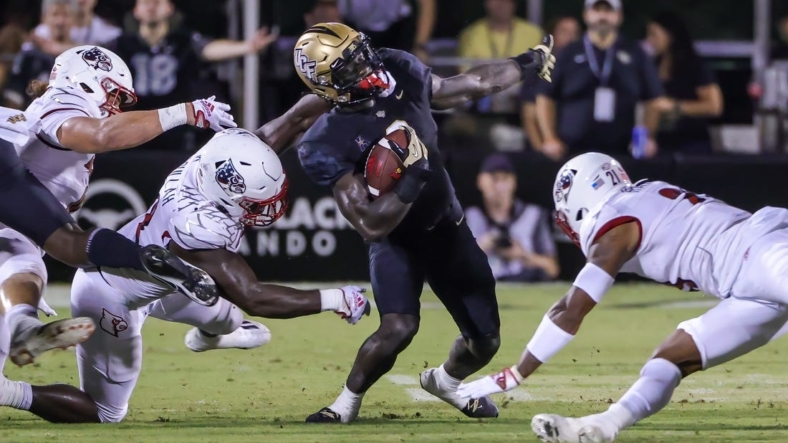 Louisville’s defense recorded four sacks, including a clutch interception by Jarvis Brownlee late in the fourth quarter, to secure a 20-14 victory over host UCF on Friday night in Orlando.

Quarterback Malik Cunningham ran for 121 yards and a touchdown on 17 attempts and passed for 195 yards on 14 of 29 passing to lead the Cardinals (1-1), who bounced back after an ugly road loss at Syracuse in its Atlantic Coast Conference opener last week.

But the Cardinals needed their defense to come through as the Knights (1-1) had two chances in the final six minutes of the game.

The Knights forced Louisville to punt on fourth-and-9 from its own 42 with 5:47 left in the fourth quarter. But after a running into the kicker penalty, the Cardinals chose to go for the first down. Cunningham rolled out and fired a short toss that was dropped by Marshon Ford giving the ball over to UCF at the Louisville 47.

UCF quarterback John Rhys Plumlee, who completed 16 of 34 passes for 131 yards and ran for 83 yards, drove the Knights down to Louisville’s 5-yard line on nine plays. But on fourth and goal, Plumlee’s pass to the back of the end zone was intercepted by Jarvis Brownlee after he wrestled the ball away from UCF receiver Jaylon Griffin with 2:52 left.

The Knights regained possession after forcing another Louisville punt with under two minutes left.

After UCF advanced into Louisville territory to the 37-yard line, the Knights turned it over on downs when Plumlee’s pass over the middle on fourth down went through the hands of receiver Xavier Townsend.

Isaiah Bowser scored both of UCF’s touchdowns in the first half from two and three yards out to give the Knights a 14-7 halftime lead.

Cunningham broke loose for a 43-yard touchdown run with 2:46 left in the third quarter to put Louisville ahead 17-14. The Cardinals’ defense, led by Kenderick Duncan’s 13 tackles and YaYa Diaby’s 1.5 sacks, kept UCF from scoring on 10 consecutive series to end the game and hand UCF only its third loss at home since 2017.