Losing streak over, Tigers eye another win over Guardians 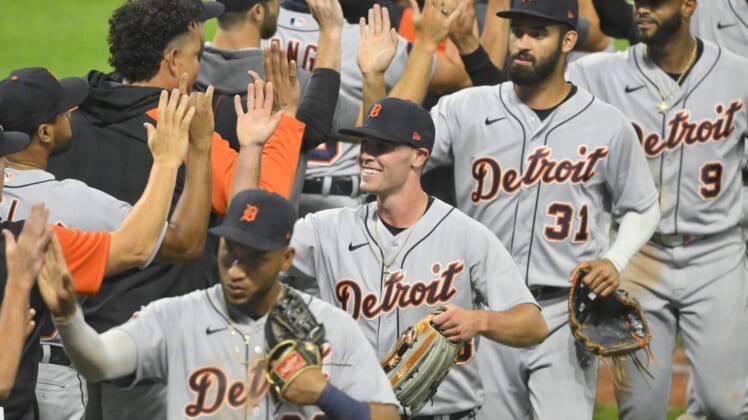 The Detroit Tigers finally had something to smile about on Monday, though they needed two chances to break their losing streak.

The Tigers’ eight-game slide fell by the wayside with a 7-5 victory in the nightcap of a doubleheader at Cleveland on Monday. The Guardians won the opener 4-1.

The teams will meet again in the third game of a four-game series on Tuesday.

Playing in his fourth major league game, the Tigers’ Kerry Carpenter smacked his first homer in the win. Carpenter, who had three hits and scored three runs in the contest, blasted 30 homers in the minors this season prior to his promotion.

“It was nice for everything to start clicking at the plate again,” he said.

Carpenter was not part of the Tigers’ plans at the start of the season but forced his way into the big leagues.

“He’s settling in,” Detroit manager A.J. Hinch said. “He needs a little bit of success to feel like a big-leaguer. Today will be a big step toward that.”

The Tigers have taken a big step backward this season, and just getting a victory provided a sigh of relief.

“We needed a win in the worst way. That’s obvious,” Hinch said. “Our guys had great energy all day.”

Andres Gimenez was the hitting star for the Guardians, as he homered in both games, including a decisive three-run blast in the opener.

Aaron Civale improved to 8-0 in 10 career starts against Detroit.

“As long as (our) starters keep the game within reason, then there’s really no hesitation or doubt or there’s no thoughts about not winning a game,” Civale said. “And that’s a really comforting and confident thing to have throughout a clubhouse. And it’s just been like that for a while.”

Zach Plesac, who will start the Tuesday game for Cleveland, had one of his best outings of the season against the Tigers on Thursday.

Plesac (2-10, 4.32 ERA) lasted 6 1/3 innings and 100 pitches and held Detroit to one run on four hits and a walk while notching seven strikeouts. The Tigers scored two runs in the ninth to tie the game, costing Plesac the victory. Cleveland won 4-3 in 10 innings.

The 27-year-old right-hander was still thrilled afterward over the Guardians’ success.

“This is real right now,” he said. “We have a lot going on right now, you can tell. … The guys know how to win and we’re playing together and finally hitting. Seems like everything is coming together right now.”

He will be opposed once again by right-hander Garrett Hill (2-3, 4.66 ERA), who was betrayed by his defense on Thursday. Hill gave up three runs, but only one earned, in five innings against the Guardians.

Hill also made his major league debut against Cleveland on July 4 and collected a victory. He gave up just one run and two hits and six innings that day.

Javier Baez accounted for the only run off Plesac last week with a solo homer, but he also hurt committed two errors.

“Defense-wise, I got to get better,” Baez said afterward. “We lose by a run and I made two errors. I’ve got to play better and not leave so many runners on base.”