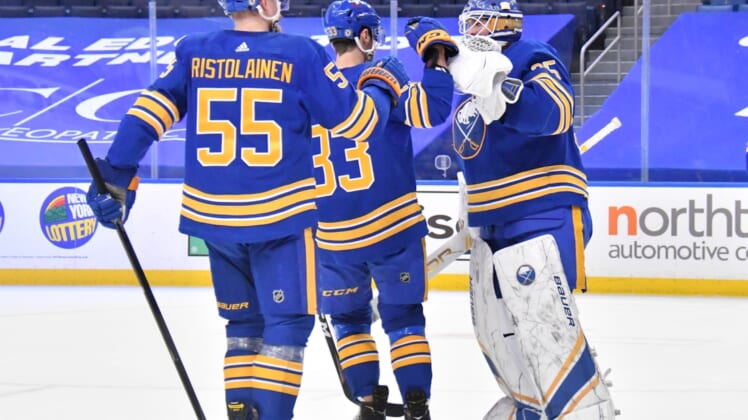 The nightmare is over, but the Buffalo Sabres won’t have much time to celebrate.

After ending their 18-game winless streak (0-15-3) on Wednesday, the Sabres are back in action Thursday against the visiting New York Rangers, a team desperate for points as it looks to remain in the East Division playoff race.

Buffalo comes in fresh off a 6-1 home win over the Philadelphia Flyers. It was the Sabres’ first victory since Feb. 23 and the first for Don Granato, who replaced Ralph Krueger as coach on March 17. Granato had been 0-5-1 since taking charge.

“It was nice to get the win because the players have been so committed,” Granato said. “The leaders have been leaders, everybody’s worked. We increased the demand on them and they responded.

“As a coach, you hope it turns for them. (Wednesday) was a good win, and we have to move right on. Not an easy one (Thursday).”

The Sabres held on Wednesday after collapsing Monday, when they blew a 3-0, third-period lead against the Flyers and fell in overtime.

“You saw (us) pretty much dominate all three periods (Wednesday),” Fogarty said. “So as long as we can keep that going, we should have some success.”

Buffalo’s Kyle Okposo picked up two assists, and he has two goals and four assists in a five-game point streak.

Buffalo goalie Dustin Tokarski, 31, could make his third start of the season. In three career games against the Rangers, he is 0-2-0 with a 5.12 goals-against average and an .854 save percentage.

New York’s Igor Shesterkin might make his fourth start in the past five games since his return from a groin injury. Shesterkin recorded 30 saves to help the Rangers rally from a 2-0 deficit for a 5-2 victory against the visiting Washington Capitals on Tuesday.

New York won for the first time in 11 games this season when trailing going into the third period.

“Obviously, Igor helped us a lot,” Rangers forward Artemi Panarin said. “He had an injury, he fought through it. And then he came back and now he’s giving us confidence to play and come back from these types of situations.”

Shesterkin is 2-0-0 with a 1.96 GAA and a .918 save percentage in two career games against the Sabres, both this season.

Panarin had a goal and two assists in the third period Tuesday and Ryan Strome had an assist to extend his point streak to 10 games (two goals, 13 assists). He became the first New York player with an assist in nine straight games since Brian Leetch in 1995-96.

The Rangers are 3-1-0 against the Sabres this season.

“We certainly know what’s in front of us and we know what’s at stake,” Rangers coach David Quinn said. “We can’t afford to take anybody lightly in this league. Nobody can. We need to continue to approach night in and night out with an effort that’s going to give us a chance to win, regardless of the opponent.”