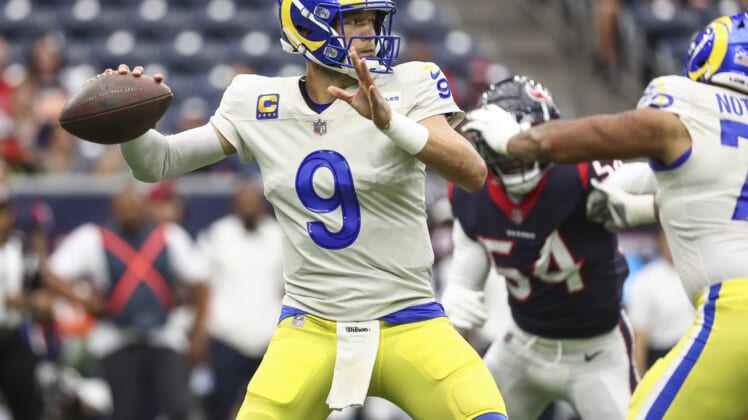 Los Angeles (7-1) dominated the game to the tune of 300 yards of total offense in the first half, building a 31-0 advantage midway through the third quarter.

The Texans (1-7) lost for their seventh consecutive game.

He caught Stafford’s third TD pass with 7:55 on the clock in the third quarter.

Houston went down fighting with three scores in the fourth quarter — all in the final eight minutes, eight seconds of the game.

With the Rams ahead 38-0 and shifting into scrimmage personnel mode, Houston caught fire.

Running back Rex Burkhead plowed for a 1-yard score to get the Texans on the board and three minutes later, quarterback Davis Mills found wide receiver Brandin Cooks for a 45-yard TD.

After recovering an onside kick, Mills connected with Brevin Jordan on a 9-yard TD and ran in the two-point conversion.

An offside penalty on the onside kick attempt threatened to curb the furious Texans’ rally, but Houston forced a punt at the two-minute warning to get another shot down two scores.

Mills completed passes of 34 and 31 yards before time expired.

Henderson rushed for 90 yards on 14 carries for the Rams, who had 31 carries for 165 yards and two touchdowns. Wide receiver Robert Woods scored rushing and receiving TDs. His 16-yard run in the third made it a 38-0 lead for Los Angeles, which outgained the Texans 467-323.