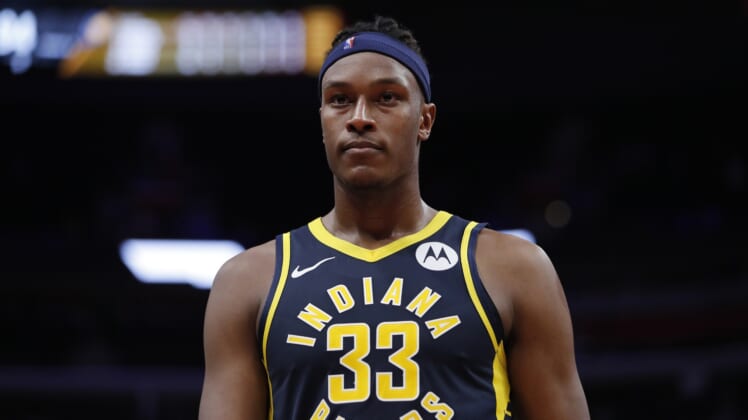 The defending champion Los Angeles Lakers are expected to be active ahead of the March 25 NBA trade deadline. While Los Angeles doesn’t have a ton of assets in terms of draft picks or any cap room, general manager Rob Pelinka could make something work.

Further east, the Indiana Pacers are struggling through a 17-21 start to the campaign after losing just 28 games during a truncated 2019-20 season. Could that lead to a Myles Turner trade and other moves within the next week or so? One report suggests that this might be the case. In fact, the Lakers are seemingly interested.

“The New York Knicks, L.A. Lakers, L.A. Clippers, Charlotte Hornets and New Orleans Pelicans are among those who have explored whether the Pacers are willing to part with the league’s leading shot-blocker,” J. Michael of the Indy Star reported Tuesday. “And that’s to be expected. The Pacers were open to trading him before the 2020-21 season began, when they put Turner in a deal to get Gordon Hayward from the Boston Celtics with a sign-and-trade.”

Indeed. Indianapolis has been looking to move Myles Turner for some time now. Whether that changes given his success this season remains to be seen.

Turner, 24, is averaging 13.2 points, 6.6 rebounds and an NBA-high 3.4 blocks on the season. As Michael points out, he’s a significant presence on defense for the Pacers. Their efficiency on defense drops big time when the young big man is not on the court.

However, other teams see the value of adding such an elite-level shot blocker to the mix. With Indiana nowhere near championship contention this season, moving a player that has been on the trade block for some time now at the height of his value makes sense. The question here is whether Los Angeles has the assets to make a deal work.

As noted above, the Lakers don’t have much in terms of draft-pick assets. That might not stop them from pulling off a significant move ahead of the NBA trade deadline with star big man Anthony Davis still sidelined to injury.

It would start with moving promising second-year guard Talen Horton-Tucker. The 20-year-old Iowa State product has shown flashes of brilliance thus far in his young career. He’s even joined the Lakers’ regular rotation as a sophomore. That’s no small thing.

From there, Los Angeles would have to add cap fillers as well as reigning Sixth Man of the Year Montrezl Harrell in order to make the numbers work. Here’s how a trade might look.

From Los Angeles’ perspective, this would give them another big until Davis returns from injury in about three weeks. Once that happens, Turner could slide in at the four next to the All-Star. It almost makes too much sense if Pelinka and Co. could entice Indiana with enough capital.

That’s the biggest question here. Harrell would be a nice find for Indiana from a scoring perspective. He’s averaging 14.2 points on an absurd 54% shooting from the field. That could mask major issues on the defensive end of the court.

Meanwhile, Horton-Tucker could potentially be packaged for another starter-caliber player. He has a ton of value given the guard’s age, upside and team-friendly contract. Acquiring a first-round pick in 2026 wouldn’t hurt matters here, either.

Click below for more Los Angeles Lakers news and rumors.