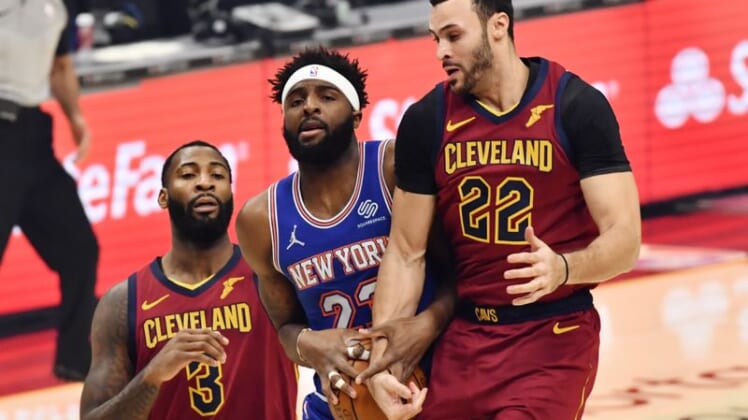 There’s going to be some major Los Angeles Lakers trade talk over the next few weeks leading up to the 2021 NBA trade deadline. That’s especially true with Anthony Davis currently sidelined to an Achilles’ injury and some concerns over frontcourt depth.

While Los Angeles doesn’t boast a ton of assets to entice other teams, there’s a number of trades the team could pull off. Here’s a look at five Los Angeles Lakers trade scenarios.

Imagine the Lakers being able to pull off a trade that reunites them with Nance Jr. He played with the team from 2015 to about midway through the 2017-18 season when the power forward was involved in the now infamous Isaiah Thomas deal. Since then, Nance Jr. has turned in a darn good career.

This far this season with the Cleveland Cavaliers, the 28-year-old forward is averaging 9.3 points, 6.8 rebounds, 3.2 assists and a resounding 1.9 steals on 48% shooting from the field. He’d be a marked upgrade over Montrezl Harrell when the Lakers want superior defense in the crunch time.

As for Cleveland, acquiring a rising youngster in Talen Horton-Tucker would have to be seen as a major coup. He’s seen as a starter-caliber wing moving forward. In fact, Horton-Tucker could star with Collin Sexton and Darius Garland in a three-guard lineup. It almost makes too much sense.

Obviously, Horton-Tucker would be the centerpiece for Sacramento in this hypothetical trade with the division-rival Lakers. It could also portend the end of Buddy Hield’s tenure in California’s capital city. But that’s a story for another time. Multiple cap fillers such as Wesley Matthews as well as two future second-round picks would also head back to the Kings.

As for the Lakers, they get a legit true center to team up with Anthony Davis inside when the All-Star returns from his Achilles’ injury. Whiteside has been in and out of the Kings’ rotation this season. However, he did averaged 15.5 points, 13.5 rebounds and a league-best 2.9 blocks for the Blazers last season.

Adding to the Lakers’ haul here, they nab a player in Bjelica who is currently on the block. The Serbian is shooting 39% from three-point range in his career and could be a stretch-four in Los Angeles.

Read More: NBA trade deadline: 5 teams that should be sellers

One of the most-underrated players in the game, there’s now talk that Young could be dealt. Expect the 32-year-old forward to draw a significant amount of interest from contending teams. Young is averaging 11.9 points, 5.9 rebounds and 4.4 assists on 60% shooting from the field for the Bulls this season.

Young is expendable due to the presence of rookie Patrick Williams in Chicago. He also wouldn’t come cheaply for the Lakers. That includes Los Angeles sending the above-mentioned Horton-Tucker to the Windy City.

However, it would certainly be worth it. Young can play all three frontcourt positions. He’s a better defender than Harrell and has proven himself to be a more efficient shooter than Kyle Kuzma. Imagine that wealth of experience and ability coming off the Lakers’ bench as they look to repeat.

We’ve heard Lakers rumors suggesting that they could be in on acquiring Bamba from the Orlando Magic. It makes sense in that he would give this otherwise veteran-laden roster more youth deep in the rotation.

Los Angeles also wouldn’t have to part with Horton-Tucker in this hypothetical trade. Instead, it gives up a fan favorite in Alex Caruso who is pretty much tapped out in terms of potential but could be a solid get for Orlando. The Magic also receive two second-round picks to add to their draft capital as the team seemingly heads into a long-term rebuild.

Speaking of true centers, Valanciunas would be a major get for the Lakers. There’s no telling whether he’s on the trade block with Memphis. However, general manager Rob Pelinka should be calling up the Grizzlies in hopes of landing this 28-year-old big man.

Valanciunas is averaging 15.4 points and 10.3 rebounds on 57% shooting from the field since the start of 2018-19 season. Sure his range is limited. His impact might also be limited as the NBA transitions away from traditional centers. Even then, he could provide a lot in spurts.

In return, Memphis picks up a capable scorer in that of reigning NBA Sixth Man of the Year Montrezl Harrell. He could also be flipped for more assets. However, the acquisition of Horton-Tucker is the centerpiece here. He could form a tremendous backcourt duo moving forward with Ja Morant.