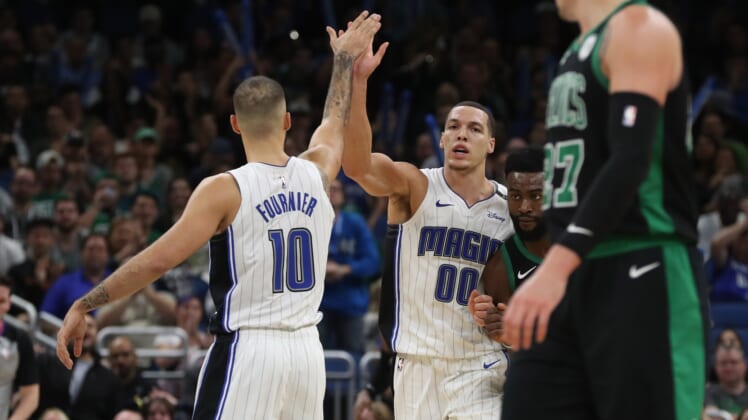 The Orlando Magic could very well be sellers ahead of the March 25 NBA trade deadline. Rumors will pick up steam big time once the All-Star Break is completed in mid-March. That will happen a little over a week until what promises to be an interesting deadline around the Association.

Boasting a 13-21 record and having lost 19 of its past 26 games, Orlando is closer to bottom-feeding status than playoff contention in a pedestrian Eastern Conference. That could very well lead to general manager John Hammond retooling on the fly.

If so, two stars in Evan Fournier and Aaron Gordon could potentially be had. According to ESPN’s Brian Windhorst, the two have been the talk of the NBA in recent weeks.

“The Orlando Magic possibly could be willing to part with a guy like Evan Fournier. Maybe a guy like Aaron Gordon, that is being chatted around about executives,” Windhorst noted recently.

Read More: Orlando Magic should blow it up ahead of NBA trade deadline

This was speculated about during the truncated NBA offseason before Fournier decided to pick up the $17 million option on his contract for the 2020-21 campaign.

Now an impending free agent, there’s no telling whether the wing plans to return to the Orlando Magic next season. Heck, the Magic might look in a different direction altogether.

Fournier, 28, has been one bright spot during an otherwise disastrous season in Orlando. He’s averaging 18.2 points and 3.9 assists on 44% shooting from the field, including a 36% mark from distance. If Fournier is put on the trade block, there would be no shortage of interest in his services.

Aaron Gordon will be highly sought after trade commodity

Currently sidelined with an ankle injury, Gordon should be back right around the NBA trade deadline. Boy, would he act as a major boon for a contending team.

Despite being in the midst of a down season, Gordon still provides a ton of upside. He’s only 25 years old and playing under a pretty decent four-year, $80 million contract. Prior to this season, the power forward had averaged 16.0 points, 7.6 rebounds and 3.3 assists per game over the past three years.

How would an Aaron Gordon trade from the Orlando Magic look?