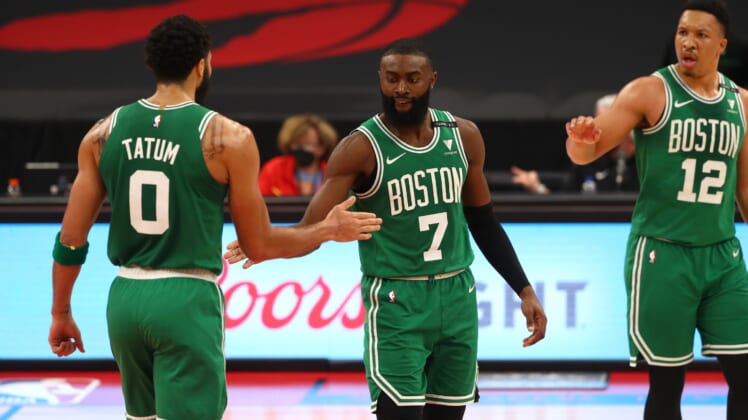 Following their ugly loss to the Atlanta Hawks on Wednesday, the Boston Celtics find themselves at .500 on the season with a 14-14 record.

This latest defeat came on the heels of general manager Danny Ainge pretty much putting his entire roster on notice. It also comes with Celtics rumors suggesting that at least one huge move could be coming ahead of the March 25 NBA trade deadline.

Ainge expanded on his view of the Boston Celtics roster on Thursday. In the process, he’s escalating what are some pretty big suggestions that a shake up could be in the cards.

Ainge being a realist is nothing new. Sure the Celtics have a ton of talent. Both Jayson Tatum and Jaylen Brown have morphed into stars. However, what we’ve seen through the first 28 games of the season clearly shows that these Celtics are missing something.

After starting the campaign with an 8-3 record, Boston has lost 11 of 17 games. That includes ugly defeats at the hands of bottom-feeding teams such as the Pistons, Wizards and Hawks over the past week. This has obviously led to some major frustration on Ainge’s part as the Celtics finish up their final eight games before the NBA All-Star Break.

To be clear, Ainge is pretty much calling himself out here. If a roster that went 48-24 last season and earned a trip to the Eastern Conference Finals is not good enough to compete for a championship in 2020-21, that’s as much on the general manager is it the players. He made that more than clear.

These comments come at a time when there’s a ton of talk in NBA circles about Boston pulling off at least one impactful trade. Ainge previously discussed that in detail, noting that it makes more sense to wait until closer to the March 25 NBA trade deadline in order to avoid missing out on better talent that may become available.

With Boston in the midst of some major struggles, the general manager is not backing away from that.

“Right now, the most likely time is right before the trade deadline as I tried to explain. That’s the time. Not today, because those deals aren’t there today,” Ainge said Thursday, via NBC Sports. “A lot of teams are still in it. They’re not sellers. In a month from now, there may be a different perspective. But we’re looking to do deals all the time.”

He did, however, admit that the Celtics need a player or two if they want to be considered serious championship contenders moving forward.

Despite their 14-14 record, the Celtics can be patient. Fans in Boston might not want to hear it. But the team is currently the fifth seed in a mediocre Eastern Conference — just two games out from a top-three seed. Waiting it out a bit longer to see who might become available makes sense.

Of those bandied about for the Boston Celtics, it’s being noted that they are looking for help out on the wing and at center. Boston boasts the $28.5 million Gordon Hayward trade exception as well as all of its first-round picks for the foreseeable future. If Ainge does pull off a trade, it’s highly unlikely to be minor.