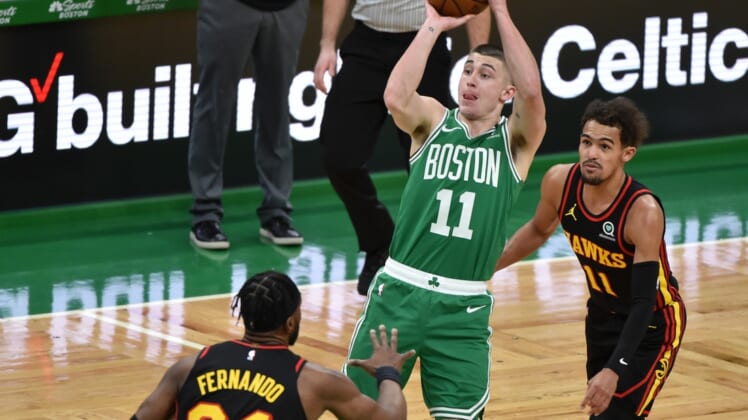 Trae Young scored 40 points, 16 in the fourth quarter, and helped the visiting Atlanta Hawks snap a four-game losing streak with a 122-114 win over the Boston Celtics on Wednesday.

Young was 14-for-20 from the field, including four 3-pointers, and had eight assists. It was Young’s ninth game with 30-plus points and first since Jan. 29, and his third game with at least 40 points.

Young reached the 4,000-point career mark with his 25th point, supplanting Bob Pettit as the fastest in franchise history to reach the milestone.

The Hawks also got 24 points and 13 rebounds from Clint Capela and 20 points from John Collins. Atlanta broke a seven-game losing streak to Boston and beat the Celtics on the road for the first time since April 8, 2018.

Atlanta coach Lloyd Pierce was not at the game. He returned to Atlanta for the birth of his second child. He is expected to miss Friday’s game in Boston, but return to the bench for Sunday’s home game against Boston. Assistant coach Nate McMillan is serving as interim coach.

The Celtics were playing without Kemba Walker (left knee management) and Daniel Theis, who missed his second straight game with a sprained right index finger.

The Celtics led 35-33 after the first quarter. The Hawks shot 60 percent from the field in the first half and led 62-56 at intermission.

The two teams play again on Friday in Boston.