Orlando Magic should blow it up ahead of NBA trade deadline 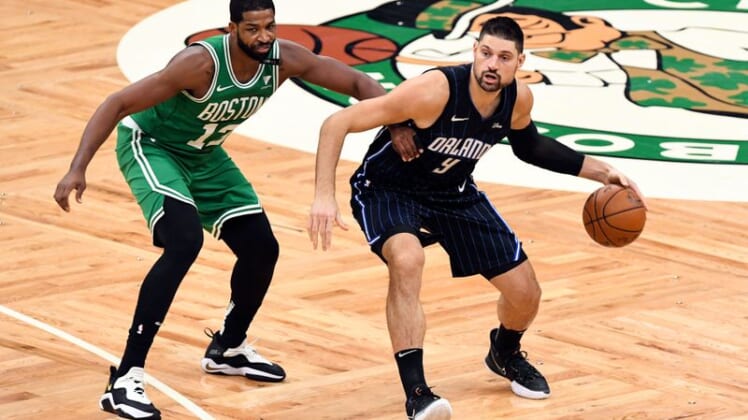 The 2020-21 NBA season started out swimmingly for the Orlando Magic. They won six of their first eight games. Markelle Fultz looked like a stud after signing an extension. Could this be the season that Orlando became more relevant on the broader NBA stage?

Fast forward less than two months, and things have spiraled out of control in a way that defies logic. Fultz is sidelined with a torn ACL. The supporting cast has not stepped up. Head coach Steve Clifford could be on the hot seat. All of this comes with the Orlando Magic having lost 18 of their past 25 games.

It’s now led to NBA rumors suggesting that president Jeff Weltman could opt to blow this entire thing up ahead of the March 25 NBA trade deadline.

“While Jeff Weltman recently negotiated extensions with Markelle Fultz and Jonathan Isaac, just about every other veteran on the Magic seems like a potential trade candidate,” Danny Leroux of The Athletic noted on Thursday. “Evan Fournier has battled back spasms all season but is on an expiring contract while Aaron Gordon’s deal only runs until 2022. The biggest domino would be Nikola Vucevic as he has been their biggest contributor yet again but Weltman could look to move him as the big man will make $24 million next season and $22 million in 2022-23.”

Things certainly have not worked out for the Magic this season. However, it must also be noted that their roster in its current iteration is nothing more than a bottom-end playoff team in a mediocre Eastern Conference. Even with Fultz in the mix last season, Orlando finished as the eighth seed with a 33-40 record and was eliminated from the playoffs by the Milwaukee Bucks in the first round.

This could very well lead to the Orlando Magic blowing everything up and starting anew within the next few weeks ahead of the above-mentioned NBA trade deadline. Below is a look at their options.

It was back in 2017-18 that a then 22-year-old Gordon looked to be a franchise cornerstone in Orlando. He averaged 17.6 points and 7.9 rebounds on 45% shooting from the field. Seen as an athlete coming out of Arizona years prior, he seemingly followed the paths of Zach LaVine and Donovan Mitchell in morphing into a legit all-around player.

Now 25, Gordon still has upside. Unfortunately, his game has regressed some. The forward has seen his scoring average decrease each of the past couple seasons, culminating in an average of 13.8 points on 43% shooting thus far this year. He’s also sidelined with an ankle injury.

Selling Gordon now likely wouldn’t result in Orlando receiving a huge bounty in return given his injury and recent downtick in production. But it might be the best move. He has one more year left on his contract with a mere $16.41 million cap hit. That has to be enticing to teams. Among those bandied about as potential suitors, the Golden State Warriors could make sense. This is magnified by the fact that Gordon is a San Jose native.

Despite dealing with recent back spasms, this wing continues to play at a high level. Fournier, 28, is averaging 17.9 points on 45% shooting from the field on the season. Contending teams could certainly use that type of efficient scoring from the two-guard or small forward position.

Of all the potential Orlando Magic trades ahead of the deadline, this one seems to make the most sense. Fournier is currently on the final year of his contract and is earning a mere $17 million. Realistically, Fournier would land Orlando a first-round pick and a young player in return. Perhaps, a team like the New York Knicks come calling with Kevin Knox and their first-round pick (from Dallas) as trade bait.

Read More: NBA trades: What blockbuster deals could be coming next?

Obviously, the super-talented and underrated Vucevic would be the cream of the crop if he were made available ahead of the NBA trade deadline. While there’s no indications that this will happen, it would make a ton of sense from Orlando’s perspective.

Vucevic, 30, won’t be in his prime when the Magic return to relevance. He’s continued to change his game to meet the modern NBA. That’s magnified by the fact that he’s shooting 41% from three-point range on north of six attempts per game. For comparison’s sake, the All-Star attempted a combined 26 shots from beyond the arc in his first five NBA seasons. Just some crazy stuff right there.

Averaging 23.4 points, 11.6 rebounds and 3.4 assists on 48% shooting this season, trading Vucevic would help expedite the Orlando Magic rebuild in a big way. They are likely looking at multiple first-round picks and a stud young player in return, at the very least. I could easily envision a scenario where the Celtics come calling. Danny Ainge is expected to be active. Offering up two first-round picks, Aaron Nesmith and another young player for Vucevic could work.

Those are the big three when it comes to potential deals over the next few weeks. However, young center Mo Bamba has been part of the NBA rumor mill in recent days. The underrated Terrence Ross and Michael Carter-Williams could also be options on the trade block.

Sure Orlando doesn’t have a ton of young talent to build moving forward. Rookie first-round pick Cole Anthony would likely take over as the face of the rebuild until Fultz returns from injury. Moving any number of these above-mentioned players would have the product in Florida as one of the worst in the NBA.

That’s fine. But at some point, you have to realize what you’re doing is not working. Jeff Weltman and his front office should be at that point right now.