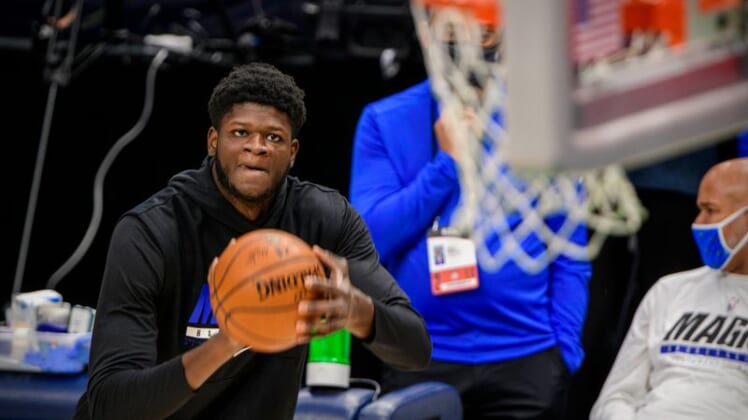 There has not been a whole lot of Los Angeles Lakers rumors with about five weeks to go before the NBA trade deadline. Sitting pretty at 22-7 on the season, the defending champs don’t really have many holes to fill.

Even then, the expectation is that general manager Rob Pelinka will be proactive when it comes to improving one of the most-talented rosters in the NBA. That could potentially include a trade for a young big man back east.

“Bamba is in and out of the rotation, playing in just 12 games this season. Bamba is 22 and the Knicks looked to trade up in that draft to get the former Texas Longhorns star. The Lakers also reportedly have interest,” Marc Berman of the NY Post reported Wednesday.

A top-six pick of the Orlando Magic back in 2018, Bamba has not panned out. He’s averaging just 4.9 points and 3.7 rebounds in less than nine minutes of action per game this season.

The Texas product has seen his numbers decline in each of the past two years after showing some promise as a rookie back in 2018-19.

With that said, there’s still some upside here. He’s only 22 years old and has shown flashes. A change of scenery could do the 7-foot center well.

The Lakers have been more linked to what promises to be a broad buyout market in the coming weeks. That could very well include six-time All-Star Blake Griffin, who has seemingly played his final game with the Detroit Pistons.

Cleveland Cavaliers All-Star center Andre Drummond could be an option, too. However, he’s more than likely going to net Cleveland something in a trade here soon.

Former Lakers win Trevor Ariza is a likely buyout option. He’s currently on the Oklahoma City Thunder and has not played a single game for the rebuilding team. Lakers rumors suggest that they have interest in Ariza.

While Los Angeles lacks a ton of assets to pull off a trade, something minor could happen on that front ahead of the March 25 NBA trade deadline. Promising young guard Talen Horton-Tucker could be enticing to teams attempts to sell off veteran assets.

Even then, the expectation is that these Lakers will be looking for a big man with Anthony Davis sidelined to an Achilles’ injury. He’s unlikely to return before the All-Star Break and could very well miss significant time after that.

The Lakers will want to take it slow with Davis in order to make sure he’s 100% healthy for the playoffs. Acquiring a veteran big would help them do that.