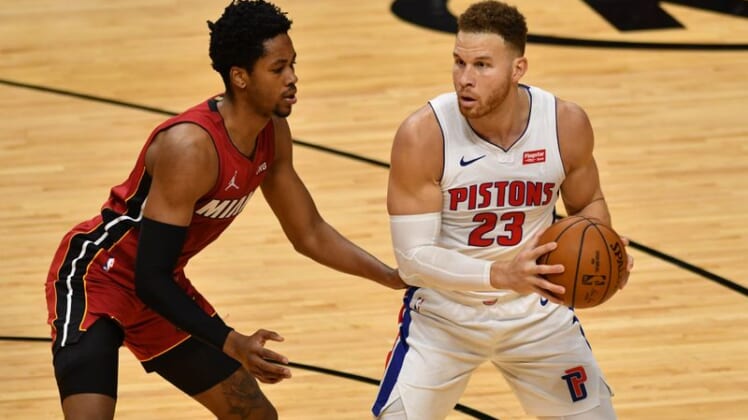 It has been a pretty steep decline for six-time Detroit Pistons All-Star forward Blake Griffin. Dealing with numerous recent injuries, one of the NBA’s most-skilled big men looks like a shell of his former self.

Griffin, 31, is averaging what would be a career-low 12.3 points to go with 5.2 rebounds and 3.9 assists on a mere 37% from the field this season. It could soon lead to a divorce between Griffin and the Pistons, too.

ESPN’s Adrian Wojnarowski reported on Monday that Griffin will be benched from the Pistons’ lineup as the team sifts through potential trade and buyout options.

“The Pistons will continue to pursue trade scenarios involving Griffin, and talks on a contract buyout with his agent, Sam Goldfeder of Excel Sports, could eventually come into focus,” the NBA insider reported.

Given Griffin’s bloated contract, a trade seems highly unlikely. He’s set to earn $38.96 million in 2021-22, the final year of his contract.

In reality, Detroit would have to take on contracts and add draft pick enticement in order to move Griffin. Very few teams would be willing to do that. Instead, a buyout seems to be the likelier scenario. Either way, here’s a look at the four-best fits for Blake Griffin, via either a trade or a buyout.

We already know that Thunder front office head David Griffin has been all about stockpiling draft picks. A hypothetical Blake Griffin trade would add to the 33 picks this organization has over the next seven years. Yeah, that’s not a typo. The idea would be to move the expiring contracts of Trevor Ariza and Mike Muscala as well as George Hill to Detroit in this trade.

In turn, the Pistons save about $29 million in salary next season and $11 million in salary remaining this year. They would then have to give up a first-round pick and multiple second-round selections in order to entice Oklahoma City. The question here is whether a rebuilding Pistons squad would rather take the financial hit of buying out Griffin rather than sending multiple picks in a trade. It’s a tight rope to walk.

Blake Griffin latches on with the Los Angeles Lakers

If Griffin were to be bought out, returning to Los Angeles could very well make the most sense for the former All-Star. He played parts of eight seasons with the Clippers, earning five All-Star appearances in the process. While a return to the Clippers could make sense, these Lakers are a more reasonable destination.

Anthony Davis is currently sidelined with an Achilles’ injury that should cost him significant time. The Lakers could also use frontcourt depth behind LeBron James, Davis and Kyle Kuzma. At this point, Griffin is probably only good for 15-20 minutes a game. Thinking of him as another All-Star on the Lakers’ loaded roster is foolish. At best, he’d be a nice bench contributor. And he wants to play meaningful games.

Blake Griffin to the Miami Heat

At 11-15 on the season, these Heat need to do something in order to avoid a lost season after earning a shocking trip to the NBA Finals last year. We’ve focused on some trade possibilities. Taking a chance on Griffin on the buyout market wouldn’t prevent Pat Riley and Co. from pulling off a trade ahead of the March 25 deadline.

Kelly Olynyk has started 20 games at power forward. That’s a less-than-ideal scenario. Sure rookie forward Precious Achiuwa has looked good, but expecting him to carry the load makes very little sense. By bringing in Griffin, the Heat would add to a veteran-laden bench that already includes Andre Iguodala, Goran Dragic and Avery Bradley. It would be the perfect low-cost move for the struggling team.

Blake Griffin to the Dallas Mavericks

Mired in a slow 13-15 start to the season, Dallas is in the same situation as Miami. It will need to pull off an impactful move to be seen as serious conference title contenders. Simply put, the supporting cast behind Luka Doncic has not done anything of substance thus far this season.

Would Griffin be that magic fix? No. However, he could provide a scoring punch with Kristaps Porzingis in the frontcourt. It’s an area that we already know owner Mark Cuban has been targeting for some time now. And as with the Heat, this would not prevent Dallas from pulling off a big deal ahead of the March 25 NBA trade deadline.