The Miami Heat have struggled to defend players from the three-point line this season. Here are three targets for the Heat as they look to improve defensively. 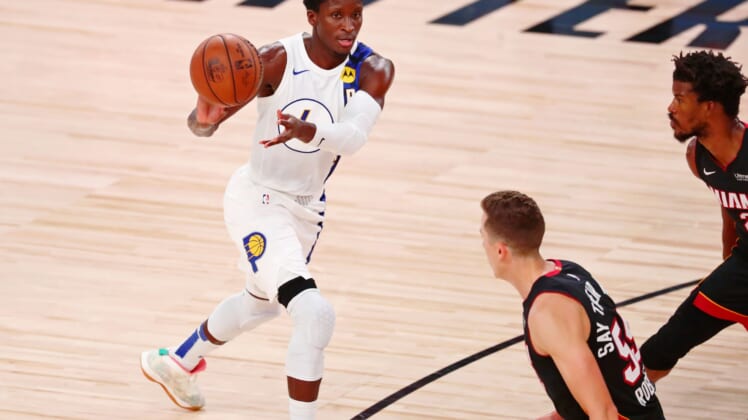 Jae Crowder may have been a bigger loss than people like to admit, as he would’ve definitely helped this issue for Miami. Players that shoot from the arc when guarded by Crowder are shooting 29.0% this season. That would rank third on the Heat behind Jimmy Butler and Moe Harkless.

The good news for Miami is the trade deadline that is coming in a month and a half. They most likely won’t stand pat and let this rollout, so here are three players that can help solve their defensive issues.

Rudy Gay would be one of the biggest acquisitions for the Miami Heat if they wanted to significantly boost their defense, in hopes for another NBA Finals run. Gay ranks number one in the entire NBA with a defensive rating of 98.3 this season. He has been a menace on the defensive end.

Gay would be far and away the best defender on the Heat, which would help them significantly in all facets. The 34-year-old forward is allowing 35.2% of the shots against him from the three-point line to go in, but it’s more than just the perimeter defense when it comes to Gay.

He’ll never be a Defensive Player of the Year, but he’s the perfect modern-day NBA forward with no glaring weakness on defense. Gay’s offense is not too bad as he boasts a 107.3 offensive rating and is shooting 37.9% from the three-point line, but defense is more of his type of game.

Gay may not be a flashy name like Jimmy Butler or Patrick Beverley, but when you dive into his play on that end of the floor, it’s almost everything the Miami Heat could want in a player. The good thing for them is that he can play at power forward, which is something they need.

Victor Oladipo seems to always make his way onto any list of players the Miami Heat should acquire. That mostly has to do with Oladipo being the perfect player for the Heat to acquire this season. He fits many of the holes the Heat have in their roster and gives them another star player.

Oladipo has been good defensively this season as he boasts a 104.9 defensive rating, which would be second on the Heat behind Butler. Oladipo was traded to the Houston Rockets in the James Harden trade that sent him to the Brooklyn Nets and has been pretty decent for them since.

The 28-year-old guard is averaging 19.6 points, 4.9 rebounds, and 5.2 assists on 38.7% shooting from the field. Oladipo is holding opposing players to 37.4% from the arc, which would help Miami as they average 37.9%, but they could send away some of their poor defenders in Kelly Olynyk and Kendrick Nunn.

Oladipo was also on the NBA All-Defensive First Team in 2018. This would work out for both sides as Oladipo would get his wish to play for the Miami Heat and the team would acquire another defensive presence that can help them from the three-point line.

Some may be confused on why Patty Mills made this list and others may be excited to see him on here. Considering the Heat already have a bunch of guards, it might not make sense to many people why the Heat would exchange someone such as Kendrick Nunn who is younger and starting for Mills.

However, his overall performance this year could change your mind. Mills has a 102.1 defensive rating in 25.6 minutes per game this season. That would be the best defensive rating on the Miami Heat. Mills also is holding shooters to 31.4% shooting from the three-point line.

Opposing players are shooting 6.4% worse from beyond the arc when guarded by the 32-year-old guard. One really good defensive possession that comes to mind is when he is guarding Denver Nuggets center Nikola Jokic in the paint. He puts a lot of effort into his defense is up for any challenge.

If you think about it and look at the statistics, Mills and Patrick Beverely are very similar players on defense. He may not be the tallest player at six feet tall, but his effort is off the charts on the defensive end. Him and Gay are one of the best defensive duos in the whole NBA, and maybe the Heat could look to acquire both.

Mills has a cap hit of $13.5 million with one year left on his deal and Gay has a $14.5 million cap hit, who also has an expiring deal. You could make the case that the Miami Heat should trade for both of them since they are on expiring deals and the Spurs could look to rebuild soon, even while sitting at 6th in the Western Conference.

Whatever Miami decides to do, they should look for a player who can defend the perimeter. They already have Avery Bradley and Moe Harkless, who are good perimeter defenders, but it wouldn’t hurt to add another player or two that can help on defense.