Kyle Lowry has been rumored to possibly be on the move before the upcoming NBA trade deadline. Here's why the Miami Heat should trade for Lowry. 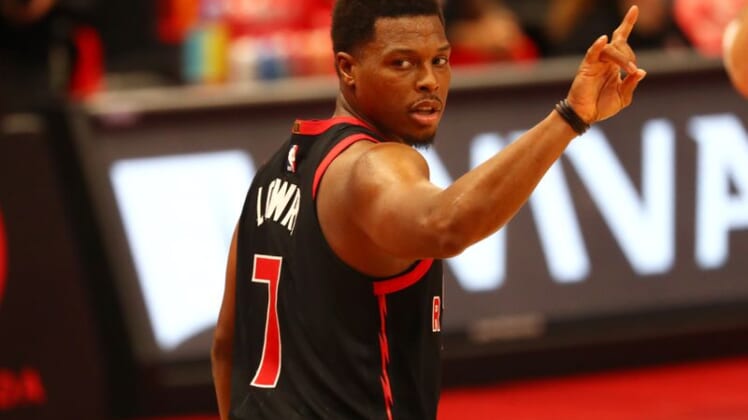 The Miami Heat had a rough start to the season due to COVID-19 and injuries, but the team has won two games in a row and faces the Knicks for a second time on Tuesday night. A lineup change has been a major effect on the two-game winning streak.

For the last two games, the Heat have brought Tyler Herro off the bench in efforts to change the way Miami’s season has gone. Kendrick Nunn has been the starter and played great against the Knicks on Sunday afternoon with 16 points, four rebounds, and three assists on 6-of-11 shooting from the floor.

However, rumors of Kyle Lowry possibly being on the move at the deadline has created a buzz around the Heat in their efforts to acquire another player. Here’s why a Lowry trade for the Miami Heat makes sense.

The Miami Heat currently do not have a true starting point guard that they can count on an every-night basis. Miami does have Goran Dragic, but he is currently out with a groin strain and has been labored with injuries throughout the season. This has resulted in Tyler Herro and Kendrick Nunn starting.

Dragic has been good with the starters this season, but it’s nice to be able to bring him off the bench and limit his workload until the playoffs. Herro is not a true point guard with his natural position being shooting guard. It’s better for him to come off the bench and focus on his own play instead of taking on other responsibilities.

Nunn has been good lately, but is he going to be an option when it comes playoff time? He didn’t produce much in the “NBA Bubble” during the 2019-2020 season and has been inconsistent on some nights. However, he does play better as a point guard than others such as Herro.

Inserting Lowry into the mix would give the Miami Heat a true starting point guard to count on every night, which is something they need right now.

Kyle Lowry is one of the better defensive point guards in the NBA this season. Lowry is scrappy and willing to put his body on the line, which is something that would fit well within the Miami Heat culture. The 34-year-old would be an improvement over their current options at point guard.

Lowry has a 108.0 defensive rating this season, which is better than Herro who has a 110.3 rating, and Nunn who boasts a better rating of 109.8. Sometimes numbers don’t tell the full story and this is the case with Lowry.

One of the more impressive stats from the regular season in 2020 was the amount of time Lowry spent guarding other players outside of point guards. He guarded power forwards (16.5%) almost just as such as point guards (18.2%) before the “NBA Bubble.”

Lowry’s defensive versatility is something the Heat would covet. They love to switch on defense and playing positionless basketball. Even though Lowry is mainly a point guard, his ability to guard 1-4 is something that would really intrigue the team.

The only issue remains who they would trade for him. Do the Heat move on from Duncan Robinson since he may be out of their price range this summer? Is it worth trading Andre Iguodala for Lowry?

Iguodala has been one of Miam’s best defenders this season and it would be hard to give him up in a deal. If they didn’t move him, they would either need to move Kelly Olynyk or Goran Dragic, who has a no-trade clause, to make a deal work with Lowry’s $30.5 million cap hit.

It seems unlikely the Heat would trade away Dragic and unless they would acquire a power forward with Lowry in return, it doesn’t make much sense to trade away Olynyk since they are loaded at guard.

These are questions Pat Riley and company will need to ask themselves. Either way, Miami will still have options open to them and should be active at the trade deadline this season.