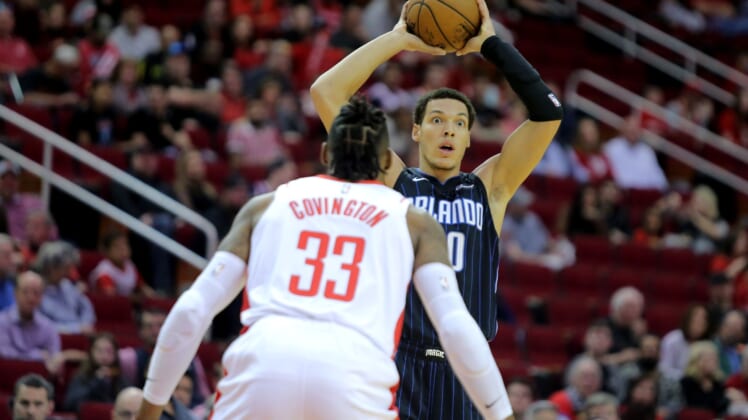 The five-time defending Western Conference champion Golden State Warriors wrapped up their truncated season back on March 11 with a league-worst 15-50 record.

Golden State will now head into the NBA offseason this coming October looking to get its star players healthy and make another run at the title. The team is also reportedly looking into one big-name player.

According to Monte Poole of NBC Sports Bay Area, Golden State is potentially looking to use its first-round pick in the 2020 NBA Draft and the Andre Iguodala trade exception to acquire Gordon from Orlando.

Golden State was linked to the Bay Area native ahead of February’s trade deadline. The team was said to be interested in dealing D’Angelo Russell to Orlando for Gordon, but Orlando backed out. Russell was ultimately traded to the Minnesota Timberwolves in a deal that saw Andrew Wiggins head back to the Warriors.

The Warriors added a $17.19 million trade exception in the Iguodala deal with the Memphis Grizzlies last summer. It expires in October. For his part, Gordon is set to make $18.1 million next season. Mathematically, a deal of this ilk would work.

Golden State has an 18% chance of landing the No. 1 overall pick in the 2020 NBA Draft. It’s seen as one of the weaker drafts in recent league history, a fact that could force Golden State into moving said selection for a proven player.

Aaron Gordon’s stats have been on the decline

Orlando might very well decide that trading Gordon for a draft pick and financial relief makes sense. The former No. 4 overall pick has seen his numbers decline in recent seasons.

There had been speculation that the Warriors might look to trade Draymond Green. That wouldn’t be part of this hypothetical deal.

Rather, the Warriors would likely go small ball with Green at the five, Gordon playing power forward and Wiggins at the three. Obviously, the Splash Bros. duo of Stephen Curry and Klay Thompson would represent the back court.