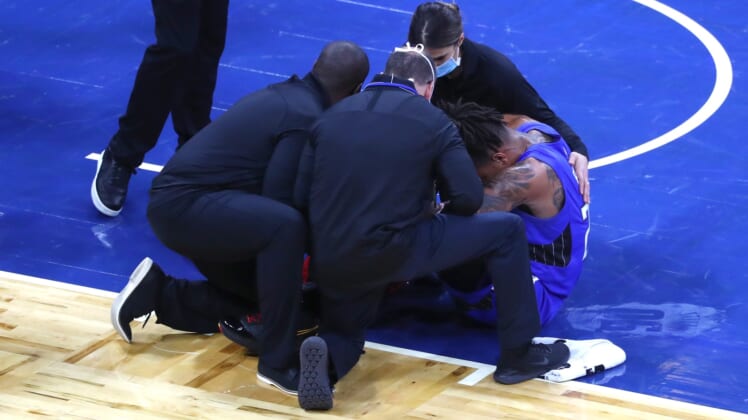 Mere weeks after signing a lucrative long-term extension with the Orlando Magic, star guard Markelle Fultz will be sidelined for the remainder of the 2020-21 NBA season.

The former Philadelphia 76ers No. 1 pick suffered a left knee injury in the first half of Wednesday night’s game against the Cleveland Cavaliers and had to exit the court in a wheelchair.

We now have more information on the Markelle Fultz injury and it’s not great.

This is just horrible news for the 22 year-old Fultz and his team. The youngster was averaging a career-high 14.3 points to go with 3.6 rebounds, 6.1 assists and 1.0 steals in seven games heading into Wednesday’s action.

This news comes less than a month after Markelle Fultz inked a three-year, $50 million extension with the Magic. It also comes with at a surprising 6-2 following Wednesday’s win over Cleveland.

At this point, it seems highly likely that promising rookie Cole Anthony will replace Fultz in the Magic’ starting lineup. He was averaging 8.7 points, 5.0 rebounds and 3.4 assists in seven games heading into Wednesday’s action.

Unfortunately, Anthony is also shooting an absurdly low 30% from the field. That needs to change moving forward if the Magic are going to earn a repeat trip to the NBA Playoffs. Second-year player Jordan Bone is also an option to see increased minutes.

With that said, Orlando could also look to the trade market for an upgrade now that Markelle Fultz is out for the season. Rumors this past fall indicated that both Aaron Gordon and Even Fournier could be moved.

If the Magic were to trade one of those players, they could find a solid veteran option on the trade block. Eric Bledsoe with the New Orleans Pelicans and Detroit Pistons star guard Derrick Rose would make some sense.