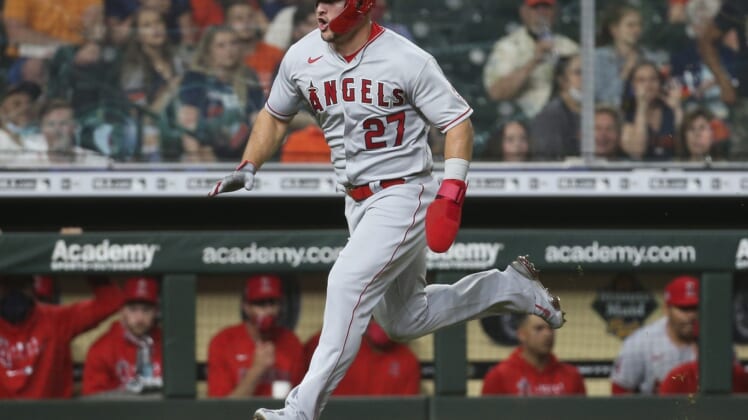 Los Angeles Angels star Mike Trout was transferred to the 60-day injured list on Monday, a move that officially means he won’t be eligible to return until after the All-Star break.

The center fielder, who is sidelined with a calf injury, leads all American League outfielders in votes for the All-Star Game slated for Denver on July 13. He is an eight-time All-Star.

Trout, 29, won’t be eligible to return until July 17. The three-time AL MVP injured his right calf while running the bases against the Cleveland Indians on May 17.

Angels manager Joe Maddon said that Trout is more than 50 percent recovered from his injury. Maddon said Trout began baseball activities on Monday and swung the bat at Angel Stadium for the first time since the injury.

“He’s doing really well, actually,” Maddon said before Monday night’s game against the host New York Yankees. “He’s on pace. He’s on target. Just moving him around right now just based on different things we had to do. But he’s good. He had a nice workout at the stadium.”

Trout was batting .333 with eight homers and 18 RBIs in 36 games prior to the injury.

Maddon said outfielder Justin Upton (back) is progressing. The four-time All-Star was placed on the IL on Friday with the move retroactive to Wednesday.

“I think he’s going to be fine. When he’s ready to come off, he should come off,” Maddon said. “He still would not be able to maneuver in the batter’s box like he normally does. But we think within a couple of days that he will.”

Also, the Angels selected the contract of outfielder Scott Schebler from Triple-A Salt Lake on Monday and optioned infielder Kean Wong to the same affiliate.