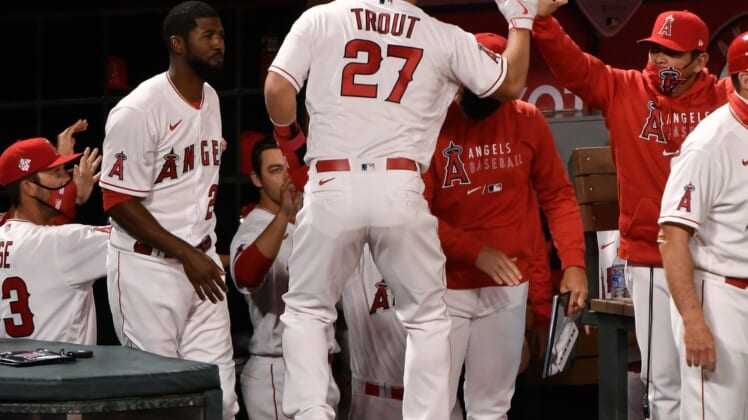 Albert Pujols’ Hall of Fame career has included many big hits and big home runs, but the Los Angeles Angels’ first baseman got the job done Thursday with an infield chopper that traveled all of about 50 feet.

Still, it was enough to drive in the winning run in a 4-3 Opening Day victory for the Angels over the Chicago White Sox in Anaheim, Calif.

The Angels scored two runs in the bottom of the eighth inning, turning a 3-2 deficit into a win, a rally that included an RBI single by Mike Trout and a clutch plate appearance from Justin Upton, whose 11-pitch walk set the stage for Pujols.

Pujols, making an Opening Day start for the 21st consecutive season, came to the plate with the bases loaded, one out and the game tied at 3-3.

White Sox reliever Aaron Bummer got Pujols to hit a high chopper that hugged the third base line. Pujols was thrown out but Shohei Ohtani scored from third.

Starter Dylan Bundy gave up three runs on six hits in six innings, the first of four Angels pitchers. Raisel Iglesias pitched a perfect ninth inning with two strikeouts to earn a save.

White Sox starter Lucas Giolito got a no-decision, though he gave up just two runs on two hits while striking out eight in 5 1/3 innings. Angels reliever Mike Mayers (1-0) got the win over Bummer (0-1).

The White Sox took a 1-0 lead in the second inning when Luis Robert created a run with two out. Robert doubled off Bundy, stole third and then scored on a wild pitch.

Giolito retired the first 11 Angels hitters before Trout walked with two out in the fourth. Anthony Rendon also walked, and Upton followed with the Angels’ first hit of the game, a single to center that scored Trout and tied the game at 1-1.

Bundy retired the first two White Sox hitters in the fifth before Tim Anderson singled. Adam Eaton then homered to right field on a 2-0 changeup to put Chicago up 3-1.

The Angels cut their deficit to 3-2 in the bottom of the fifth on Max Stassi’s two-out homer. The catcher hit an 82-mph changeup from Giolito over the fence in center.