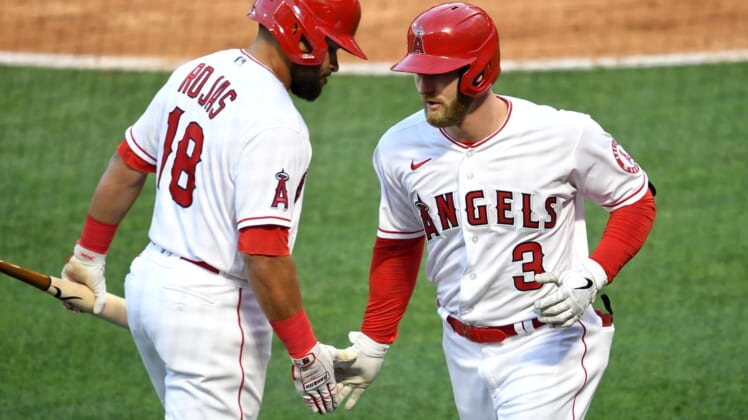 David Fletcher delivered run-scoring hits during each of the Los Angeles Angels’ four-run innings Friday night as the Angels cruised to a 9-2 win over the visiting Los Angeles Dodgers.

Griffin Canning (3-2) allowed one run over 5 2/3 innings and combined with Patrick Sandoval on an eight-hitter as the Angels snapped a five-game losing streak and extended a lengthy tailspin for the Dodgers, who have lost four straight and are 4-14 since a 13-2 start.

Fletcher finished 3-for-5 with three RBIs while Shohei Ohtani had a pair of RBI doubles. Mike Trout had two hits, including a run-scoring triple, while Josh Rojas fueled the four-run sixth by collecting his first career RBI with a double. Justin Upton and Taylor Ward had solo homers in the second while Jose Iglesias added two hits.

Canning gave up six hits and three walks while striking out four in winning his second straight start. Sandoval surrendered one run in the final 3 1/3 innings in earning his first career save and recording the longest save by an Angels pitcher since Jerome Williams allowed five runs over four innings to close out a 15-8 win over the Texas Rangers on July 30, 2012.

Matt Beaty delivered a run-scoring groundout in the top of the second to give the Dodgers a short-lived lead. Mookie Betts hit a solo homer in the ninth while Chris Taylor had two hits.

Julio Urias (4-1) allowed five runs on eight hits and no walks while striking out four over five innings.

Upton homered leading off the second. Ward homered two outs later, after which Rojas was hit by a pitch and Drew Butera doubled before Fletcher delivered a two-run single.