Most Lopsided MLB Trade Deadline Deals of All Time

Much like when amateur drafts are conducted in professional sports, you have to wait a couple years before coming to the conclusion about how MLB trades are going to impact the teams involved years down the road. These trades come together for a couple of reasons. Mainly, it’s one team that is no longer in contention looking to trade a veteran to another team that might give up a high price for said veteran.

In the heat of the moment, major mistakes can be made. Even some of the best general managers in the history of the game have given away rare talent for pennies on the dollar. Let’s go ahead and check in on the 10-most lopsided trades in the history of MLB.

Courtesy of ESPN: Imagine Brock and Ernie Banks on the same team together. Never happened.

Let’s start with what many consider one of the most lopsided trades in the history of professional sports. Chicago was looking to add a veteran arm that had won 21 games five years prior. In order to do so, it had to give up one of its prized prospects, Lou Brock. In a deal that ended up benefiting the Cardinals both short term and long term, Brock went on to hit nearly .350 in the second half of the season for St. Louis, eventually helping his new team defeat the New York Yankees in the World Series.

In total, Brock finished his Cardinals’ career with a .297 batting average, 888 stolen bases and six All-Star appearances. He was inducted into the Baseball Hall of Fame in 1987.

Meanwhile, Broglio bombed out big time in Chicago. After winning 60 games in his last four seasons in St. Louis, the starter won a total of seven games in three seasons with Chicago before retiring following the 1966 season. 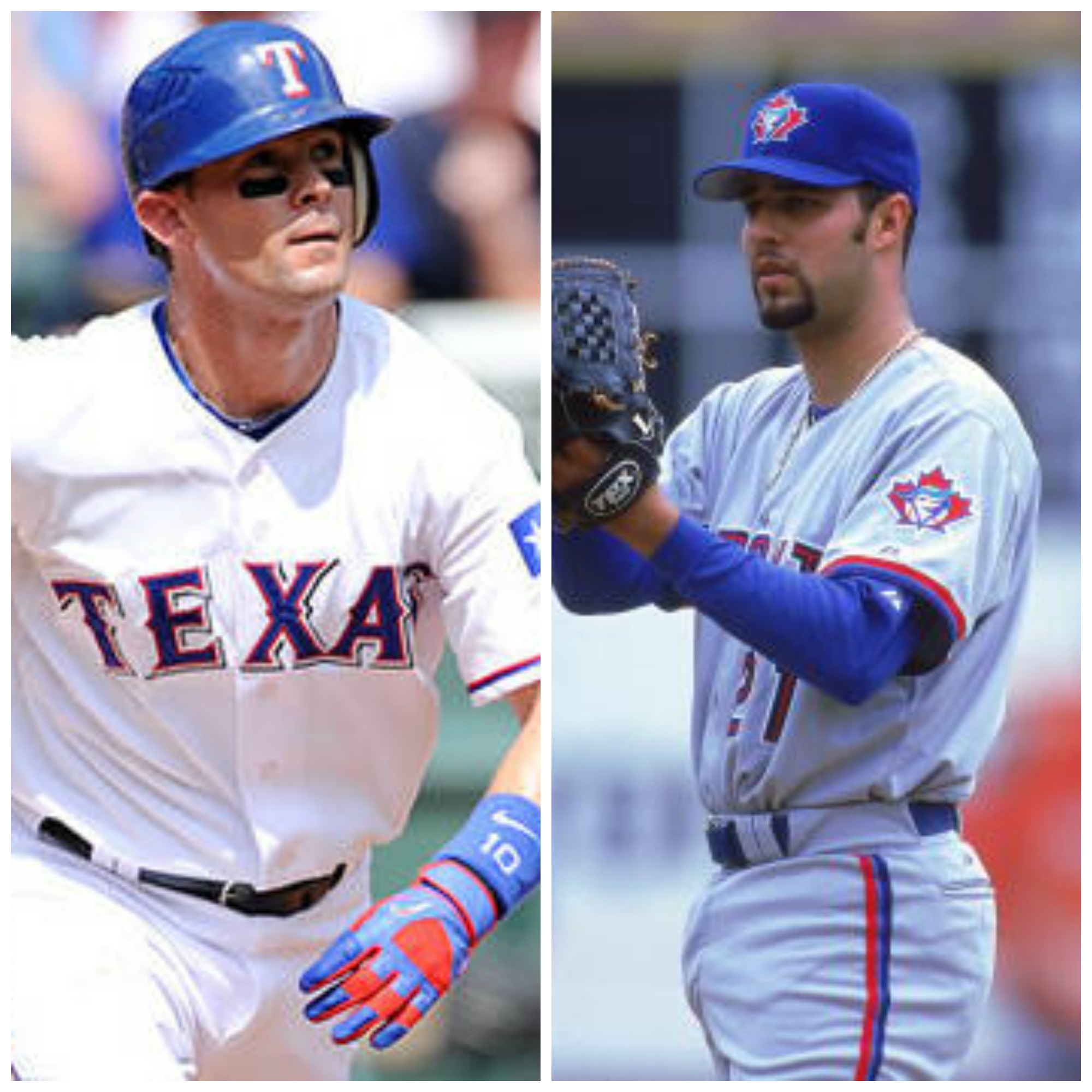 Michael Young became one of the greatest Rangers ever.

Toronto was in contention for the AL East championship when this trade went down. It needed an upgrade in the rotation and decided to offer a young prospect to the last-place Rangers in return for it. Unfortunately for the Blue Jays, that prospect went on to earn seven All-Star appearances in 11 years with Texas. On the other hand, Loaiza won just five of his 14 starts for Toronto in the second half of the season. Overall, he went 25-28 in two-plus seasons with the Blue Jays. 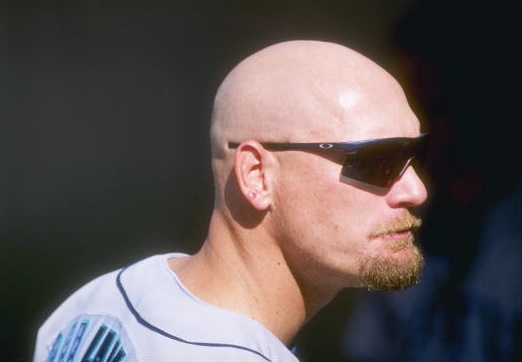 Courtesy of The Big Lead: Seattle stole Buhner from the Yankees.

This trade was so lopsided that they made a Seinfeld episode surrounding the topic. New York was in the middle of a division race and was looking to add to a lineup that needed some help. Phelps had hit 14 homes in 72 games with the Mariners prior to the deal. He was also coming off three consecutive 20-plus homer seasons. In reality, this deal made sense for New York.

As with the trades mentioned above, the Yankees’ major issue is what they gave up to get Phelps. Buhner, then a 23-year-old power hitting prospect, struggled with the Yankees prior to the deal, hitting just .215 in 261 at-bats. With that said, he was considered a top farm player for the team, netting 31 homers in Triple-A the previous season. He went on to hit 307 homers and drive in 951 runs in 14 seasons with Seattle. Phelps finished the 1988 campaign hitting just over the Mendoza Line for New York and was traded the following season.

Trading within the division. Not usually the greatest of ideas. Toronto was in full-scale selling mode when the 1995 trade deadline rolled around. And New York had the necessary prospects to land the best arm on the open market. Cone was 9-6 with the Blue Jays prior to the trade and was just two years removed from winning the American League Cy Young. In exchange for Cone, the Yankees yielded a top prospect in Janzen and two youngsters with Major League upside.

Janzen made his MLB debut the following season, but pitched in only 27 games in two years with Toronto. The other two players acquired in this deal never made the Blue Jays big league squad.

Cone ended up helping New York earn a playoff spot in 1995 and pitched a perfect game a few years later. He was a key member of four championship teams and finished his Yankees career with a ridiculous 60-26 record.

Back in June of 1977, the Mets traded Seaver to Cincinnati after it became apparent that he wasn’t happy in New York. Despite winning nearly 200 games in 12 seasons, Tom Terrific was sent packing to a Reds team that was in need of an upgrade in the rotation. Seaver went on to go 14-3 with a 2.34 ERA in 20 starts with the Reds that season. He tallied a no-hitter the following year and won 75 games during his time with the Reds.

Of the players New York acquired in this deal, Henderson had the most impact. He hit 12 homers and drove in 65 runs for the Mets to end the 1977 campaign, which was good enough for a second-place finish in the NL Rookie of the Year voting. Henderson never really progressed and was gone within four years. Flynn was a .234 hitter in parts of five seasons with New York, earning a Gold Glove in 1980. Meanwhile, Zachry never won more than 10 games in a season with the Mets and Norman hit .227 in 192 career games. 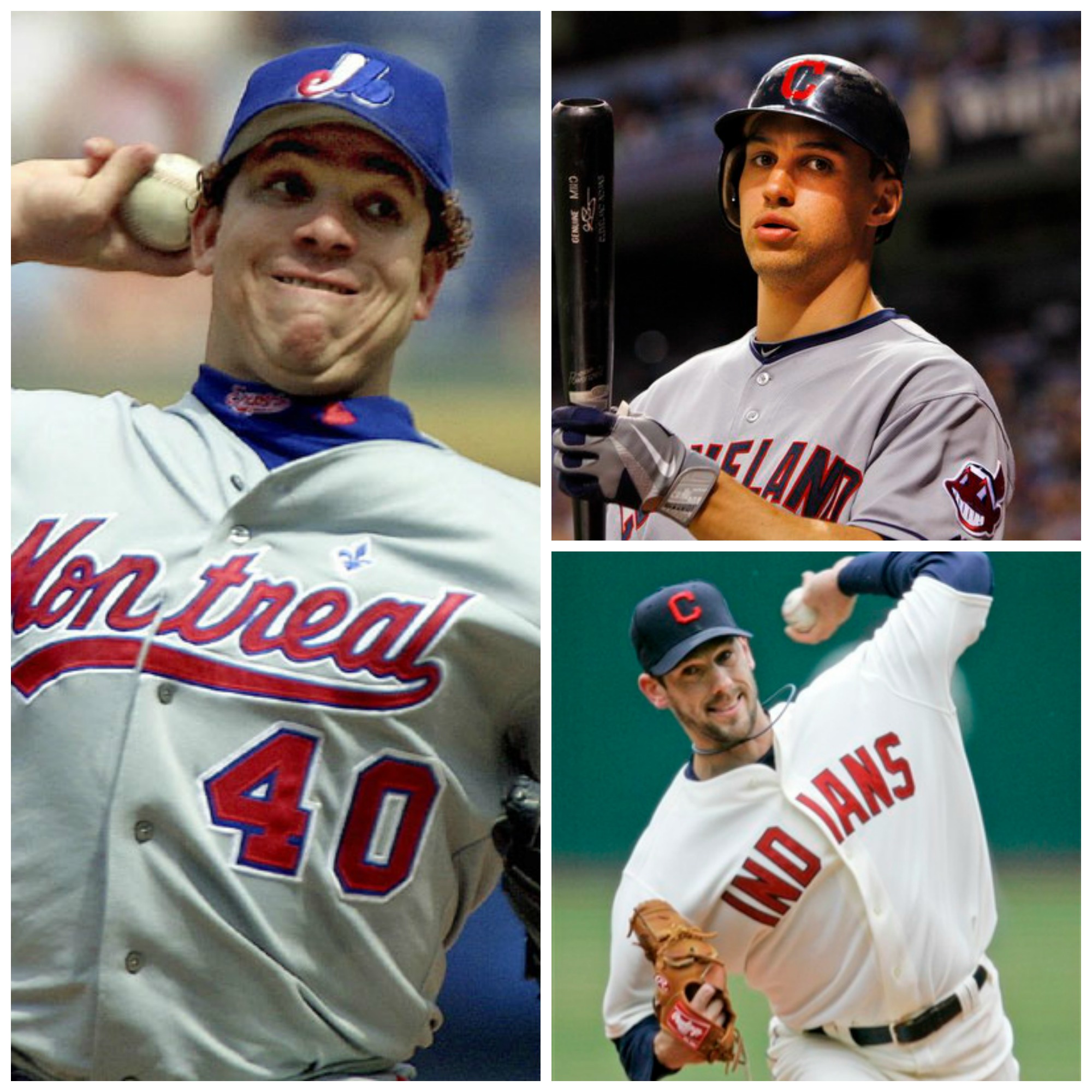 The blockbuster to end all blockbusters, Indians committed highway robbery.

When the Expos acquired former Cy Young winner Bartolo Colon during the 2002 trade deadline, a lot of people were thrown off. We all knew he would be nothing more than a rental at that point. Colon was 10-4 with a 2.55 for the Indians at the time of the deal and finished the 2002 season with 10 wins for Montreal. Unfortunately, the Expos finished just four games over .500 and 19 games behind the Atlanta Braves in the NL East. Colon was moved to the Chicago White Sox just a few months later for Rocky Biddle, Orlando Hernandez and Jeff Liefer. Ouch.

Meanwhile, three of the four players Cleveland acquired in this deal ended up making All-Star teams throughout their career. Lee was a September call-up that season, but saw action in only two games. He would then see action in nine games the following year before earning a full-time spot in the rotation in 2004. The rest is history. Lee won 83 games in parts of six seasons with Cleveland, earning the AL Cy Young in 2008.

Phillips never really panned out in Cleveland and was traded to Cincinnati prior to the start of the 2006 season. However, the infielder has earned three All-Star appearances and four Gold Glove awards since.

For his part, Sizemore earned three consecutive All-Star appearances for the Indians. His best season came back in 2008 when he hit 33 homers, drove in 90 and stole 38 bases. Injuries eventually caught up with the five-tool player. Either way, the Indians committed highway robbery in this deal.

Courtesy of ESPN: Bagwell became one of the greatest Astros ever.

Larry Andersen was having a solid season for the Astros in 1990 when they moved him to Boston for a Double-A player that was hitting .333 in the minors that season. Andersen went on to post a great 1.23 ERA in 15 appearances for Boston, but couldn’t help it get past the Oakland Athletics in the ALCS. He moved on to the San Diego Padres in free agency the following season.

Bags, on the other hand, was a dominating figure for Houston over the course of his entire 15-year career. Starting in 1990 when he won NL Rookie of the Year honors, Bagwell was simply the face of a franchise that ended up earning six playoff appearances and a world series appearance during his tenure. Overall, Bagwell hit 449 homers and drove in 1,529 runs with the Astros. He earned four All-Star appearances and won the NL MVP in 1994. All that for a reliever that pitched 15 games for the Red Sox.

McGwire was set to enter free agency and the A’s were starting to realize that their financial situation wasn’t going to allow them to retain him long term. In addition to that, Oakland was in the midst of its fifth consecutive losing season. There simply wasn’t a reason to keep McGwire any longer. So the decision to trade him made sense. Unfortunately, McGwire became the all-time single season home run leader in St. Louis and the three players Oakland acquired amounted to pretty much nothing in the Majors.

McGwire hit a ridiculous 220 homers in five seasons with St. Louis, breaking Roger Maris’ single-season record with 70 in 1998. He followed that up with a whopping 65 the following season.

For the A’s, this trade didn’t do what they intended it to do…rebuild the farm system. Stein started 21 games in two seasons with Oakland, boasting a 6.60 ERA in the process. While Oakland did net Kevin Appier in a package that included Stein a couple years later, he never became the ace they had hoped. On the other hand, Ludwick did absolutely nothing for the A’s. He started just five games in 1999, going 1-4 with an 8.25 ERA. Mathews did play parts of five seasons with Oakland, but never became the shutown closer it had hoped for.

John Smoltz, one of the greatest pitchers of the modern era, was sent from Detroit to Atlanta for a pitcher in Alexander, who actually went 9-0 with a 1.53 ERA for the Tigers after this mid-season deal. At that point, it seemed Detroit got the better end of this deal. Unfortunately, it didn’t reap any sort of long-term benefit. Alexander combined for a 20-29 record in his final two seasons with Detroit before retiring following the 1989 season.

Smoltz won 210 games in a 20-year career for Atlanta, winning the NL Cy Young in 1996. He put up eight All-Star seasons, finished with double-digit wins 13 times and finished 14-4 with a 2.67 ERA in the postseason. Heck, Smoltz even put up 144 saves in a three-year span when the Braves needed bullpen help and it looked like he was better suited as a reliever. Likely the most lopsided deal in the history of the game.