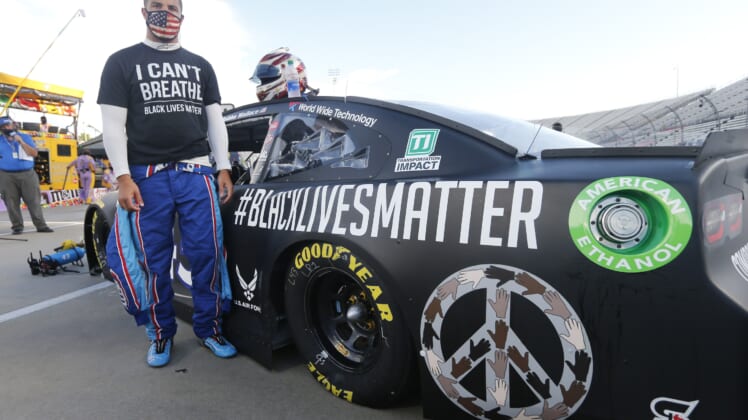 NASCAR made news earlier on Wednesday when it announced that the Confederate flag would be banned from events moving forward. This comes on the heels of of major protests around the United States supporting racial equality and demanding change to the social justice system.

Veteran driver Bubba Wallace showed up to Wednesday’s Blue-Emu Maximum Pain Relief 500 at Martinsville Speedway in Virginia sporting a “I Can’t Breathe” t-shirt while preparing to drive a Black Matters Live car for the annual event.

As the only full-time African-American driver in NASCAR, Wallace has taken center stage. Here, he is paying his respects to a man by the name of George Floyd who was murdered by a then-Minneapolis police officer back in May 25.

One of Floyd’s famous last statements, “I Can’t Breathe,” has been used as a rallying cry for those continuing to protest police brutality in the United States.

At least one professional driver announced on Wednesday that he will retire from NASCAR following the league deciding to ban the Confederate flag. Though, we have not seen widespread protests as it relates to said decision.

To many Americans, the flag is seen as disrespectful to the African-American population while paying homage to a self-identified nation that fought against the actual United States in the Civil War. To others, it’s a representation of our shared history.

For his part, Wallace gave props to NASCAR for banning the flag as he was wearing the “I Can’t Breathe” shirt and sporting an American flag face mask ahead of the race.