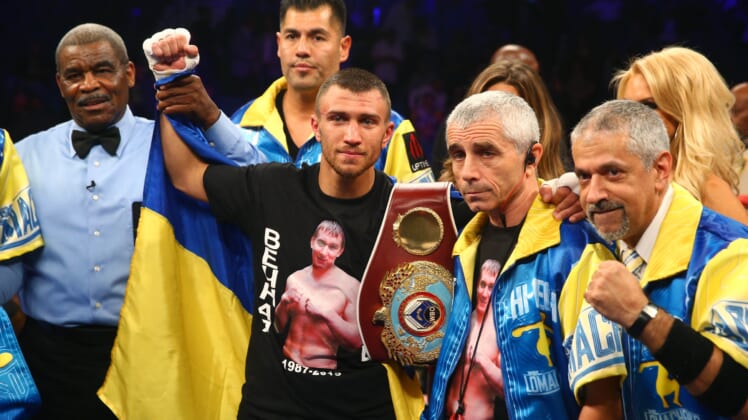 The lightweight division has been shaken to it’s very core over the past year due to a wealth of upsets, fighters leaving/entering the division and new challengers in the title scene.

Possibly the biggest change in the lightweight division that has had an effect on the rankings is former unified lightweight champion Teofimo Lopez announcing he is moving on from the division after losing his titles this past November.

We’ll see how much this has effected the rankings as we take a look at the top -0 lightweight boxers in the world today.

Javier Fortuna previously reigned as the WBA world champion in the super featherweight division winning the belt from Bryan Vasquez in May 2015. After a successful title defense he would lose the belt to Jason Sosa. Fortuna moved up to the lightweight division after losing his WBA belt. He received his first world title fight at lightweight after winning his first four fights in the division ending three fighter’s undefeated streaks.

In that title fight, he unsuccessfully challenged Robert Easter Jr. for the IBF Lightweight title losing by split decision. Fortuna has won each of his last three fights including a win over former featherweight champion Jesus Marcelo Andres Cuellar. He last fought in July losing to Joseph Diaz by unanimous decision in his lightweight debut.

After two successful title defenses, Linares then went on to win the WBA Lightweight championship after beating Anthony Crolla. He successfully defended the belt three times including a rematch against Anthony Crolla and Luke Campbell. He would lose the belt to Vasyl Lomachenko by 10th round TKO. In spite of losing to Lomachenko, he holds the distinction of being the first fighter to drop him in his professional career.

After another setback losing by shocking first round knockout against Pablo Cesar Cano, Linares bounced back winning two straight bouts. He got another shot at being a champion in May but was unsuccessful losing to Devin Haney by unanimous decision.

Isaac Cruz has been in the lightweight division since he made his pro debut in 2015 with his most notable win coming against former world title contender Diego Magdaleno who he beat by knockout less than a minute into the fight.

After six long years in the division having never challenged for a world title, Cruz finally got his chance when he fought Gervonta Davis for the WBA Lightweight title. After a hard fought bout, Davis was awarded the decision victory though there are people that argue Cruz deserved the win.

Diaz got his first shot at a world title in his next fight when he challenged Devin Haney for the WBC world title but was unsuccessful in a competitive bout.

Off an unsuccessful attempt in his first world title fight against Robert Easter Jr. in September 2016, Commey went on to win the IBF Lightweight title three years later when he beat Isa Chaniev by 2nd round TKO. This made him the first African born lightweight champion in the division’s history.

Following a successful title defense against Raymundo Beltran, he would lose the belt to Teofimo Lopez after getting knocked out in the 2nd round. Last month, Commey returned to the ring for the first time since losing his IBF belt beating Jackson Martinez by 6th round knockout.

He will return to the ring this Saturday when he faces Vasyl Lomachenko in what could be the first step to getting another shot at a world title.

Most may know Ryan Garcia for his growing social media profile, but best believe he is a problem once he steps in the ring. Like Devin Haney, Ryan Garcia is also 22-years-old and is primed to become a star in the sport of boxing. His most notable wins include first round knockout victories against Romero Duno and Francisco Fonseca as well as a win against Jayson Velez.

In Garcia’s most recent bout against Luke Campbell, he faced his first bit of adversity when he was knocked down for the first time in his career in the second round. He was able to recover and went on to win the fight via 7th round TKO with a body shot. He was scheduled to return to the ring in November against Joseph Diaz but was forced to pull out of the bout due to a hand injury.

Following a storied amateur career, that included winning two Olympic Gold medals, Vasyl Lomachenko stepped into the professional ranks as a featherweight receiving a world title fight in just his second bout. Fighting for the vacant WBO Featherweight title, Lomachenko suffered his first loss in a majority decision upset to Orlando Salido. However, the title remained vacant due to the title not being on the line for Salido due to missing weight. Lomachenko would subsequently win the title in his next fight beating Gary Russell Jr. by majority decision.

After three successful title defenses, would move up to the super featherweight division where he would win the WBO title after beating Roman Martinez. Lomachenko moved up to the lightweight division in May 2018 where he would win the WBA Lightweight title beating Jorge Linares. He would become unified champion in his next fight beating Jose Pedraza winning the WBO belt. Lomachenko lost his championships in October when he lost to Teofimo Lopez by unanimous decision in a bout where Lopez’s IBF title was also on the line.

Haney has since successfully defended the title four times against Alfredo Santiago, Yuriorkis Gamboa, Jorge Linares and most recently Joseph Diaz all coming by unanimous decision.

Turning pro in 2013, George Kambosos Jr. made his name in his native Australia winning regional titles until making his US debut in 2018. After consecutive wins over former world champions Mickey Bey and Lee Selby, he got his first world title shot against unified champion Teofimo Lopez.

After the fight against Lopez was delayed for months due to a multitude of issues including contract issues, COVID-19 positive test, and a purse bid, the fight finally took place in December. Kambosos overcame huge odds as a underdog going into the fight dropping Lopez in the first round and carrying out that momentum into the succeeding rounds to a decision victory.

Gervonta Davis is a rare case of someone who currently holds belts in two different weight classes in the WBA Super World Super Featherweight title and the WBA Regular Lightweight title. His first world championship in came in January 2017 when he won the IBF Super Featherweight title by beating the previously undefeated Jose Pedraza. After a successful title defense against Liam Walsh, Davis was stripped of the title due to missing weight in his fight against Francisco Fonseca which he would also go on to win.

He would win the WBA Super World Super Featherweight title in April 2018 beating Jesus Marcelo Andres Cuellar. In December 2019, after two successful defenses of his super featherweight title, he moved up to the lightweight division winning the regular WBA Lightweight title after beating Yuriorkis Gamboa.