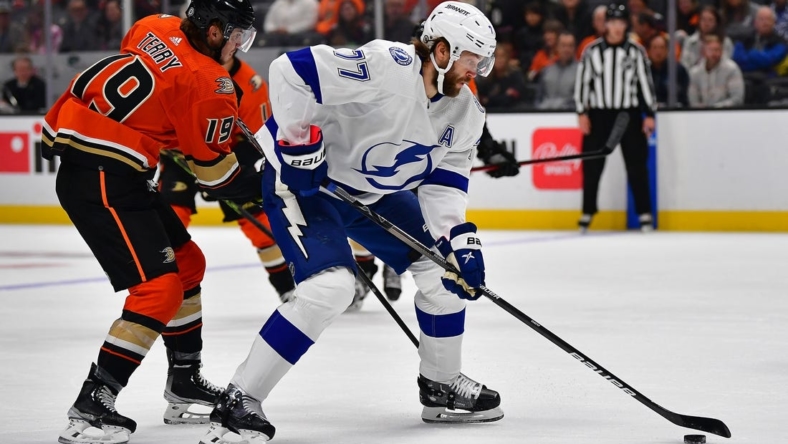 Brandon Hagel tallied a tiebreaking, power-play goal late in the third period as the Tampa Bay Lightning won for the first time on their three-game California trip, beating the Anaheim Ducks 4-2 on Wednesday.

On Tampa Bay’s third power play, Hagel fired a high shot in for the game-winning goal. Nicholas Paul, who also had an assist, scored into an empty net with two seconds remaining for the final margin.

Mikhail Sergachev had a goal and an assist, and Nikita Kucherov scored to extend his point streak to six games for the Lightning, who won for the fourth time in eight games and for the sixth time in the past eight games in Anaheim.

Anaheim’s Troy Terry posted a goal and an assist, and Trevor Zegras found the net. Dmitry Kulikov notched an assist for his 200th NHL point. John Gibson stopped 26 of 29 shots, but the Ducks lost their sixth straight game (0-5-1).

The Ducks’ second line was dinged up early when left winger Max Comtois went to the dressing room briefly before the first period’s midpoint, but the trio of forwards found paydirt at 14:25 after Comtois returned to the ice.

Terry’s strong forecheck behind Elliott and theft of the puck ended with Zegras blistering his fourth goal from the right circle with a wicked strike that went over Elliott.

But the pace in the first period continued to pick up when Sergachev sailed in a shot at 17:18 to tie it. That tally lifted the Lightning, who added on when Kucherov one-timed a pass from Hedman for his second goal just 1:26 later.

While the Ducks produced only four shots in the opening frame, a fine individual effort by Terry knotted the match at 2 at 16:39 of the second. Terry’s stickwork in the left circle against defenseman Philippe Myers led to a steal, and the right wing gathered the puck in the slot and buried his fourth goal.

In the third, Elliott and Gibson each made outstanding saves to keep the contest even, but Tampa Bay went on the man advantage after Zegras high-sticked Pat Maroon. Hagel then roofed his third goal at 15:33 for the game winner.