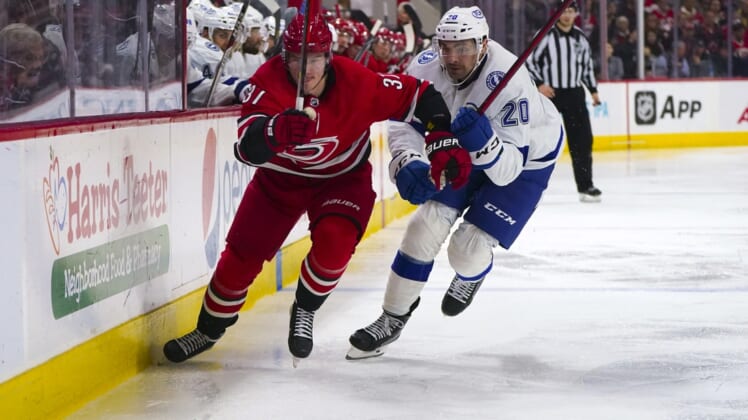 After rediscovering their form with two wins following a 17-day stretch of mostly bad hockey, the Tampa Bay Lightning can finally settle into their home digs for a while.

In the opener of a four-game homestand, the Lightning will host the Metropolitan Division-leading Carolina Hurricanes on Tuesday night. Carolina is going off a 6-1 road rout of the Washington Capitals on Tuesday.

The Lightning’s week-long stay at home will be followed by a road game against the Capitals, then a return to the bay for two more games — a stretch of six home tilts in a seven-game stretch through April 10.

Tampa Bay went 2-2-0 on its recent four-game road trip, but the trek ended well with victories over the Detroit Red Wings and New York Islanders.

When the Lightning descended into a wild-card position after losing 3-2 to the Boston Bruins on Thursday, coach Jon Cooper’s squad had dropped three consecutive contests for the second time in what is now a 7-7-0 month of March.

One of those seven setbacks occurred on March 22 in Raleigh, N.C., when Carolina edged Tampa Bay 3-2 by scoring twice on its four power plays.

“The penalties hurt us and we spent too much time in our zone,” Cooper said. “If you’re going to spend time in your zone, it’s tough to score.”

In March, Cooper’s penalty-kill crew has been on the ice 57 times in 14 games, successfully denying a goal on 49 of the occasions (86 percent) — a good success rate but time not spent in the offensive end.

On Sunday in their first visit to the Islanders’ new arena, the Lightning scored four unanswered markers and concluded a set of back-to-back games with a 4-1 win.

“It was a complete effort at the end of a road trip,” said defenseman Mikhail Sergachev, who posted a goal and an assist on Sunday.

In the teams’ first meeting in Tampa on Nov. 9, the Hurricanes’ prevailed 2-1 in overtime. Martin Necas made a clever move on Lightning defenseman Victor Hedman and whipped home the game-winning goal 3:26 into the extra period.

During their Monday clash with the Capitals, the Hurricanes saw their two-goal lead slashed to 2-1, but Sebastian Aho’s spectacular short-handed tally allowed Carolina to pull away again.

In a one-on-one foot race, the Finnish speedster grabbed a loose puck and smoked by Marcus Johansson — a forward having to skate back and play defense — before jamming in his 29th goal for a 3-1 lead.

Necas recorded two goals and an assist, but the game ended on a sour note, as Washington’s Lars Eller laid out Jesperi Kotkaniemi with a vicious charging infraction with just 1.8 seconds remaining.

Kotkaniemi was helped off the ice and hobbled down the tunnel.

“For me, that’s just so stupid,” Necas said. “It’s a 6-1 game, one second left and he tries to be a hero or whatever. I don’t know. I have no words for that. It’s just ridiculous.”

Carolina coach Rod Brind’Amour added that Kotkaniemi was “not doing great.” Brind’Amour didn’t know the extent of the injury, saying, “It’s not good.”