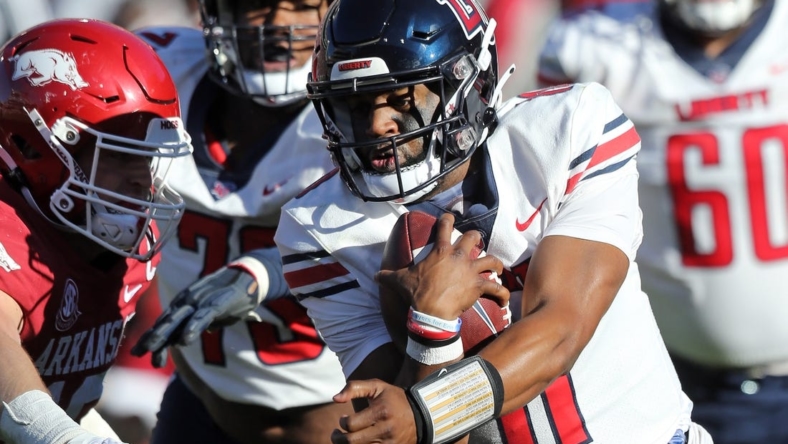 Johnathan Bennett threw a career-high three touchdown passes and Liberty’s defense came up with a key stop late as the Flames posted their first-ever win over a Southeastern Conference opponent with a 21-19 victory over host Arkansas on Saturday in Fayetteville, Ark.

The victory for the Flames (8-1) wasn’t secure until Arkansas quarterback KJ Jefferson was ruled just short on a potentially tying 2-point conversion try with 1:11 left in the game. After a review upheld the ruling, the Flames recovered the onside kickoff.

Bennett completed 15 of 25 passes for 224 yards, 145 of it on Demario Douglas’ 7 catches. Douglas was one of three Liberty receivers who caught a touchdown pass.

The Flames were up 21-5 midway through the fourth quarter until Jefferson threw two touchdown passes to Trey Knox, with and Raheim Sanders rushing for a 2-point conversion after the first to get the Hogs to within one score at 21-13 with 7:42 left.

The Hogs (5-4) got the ball back at their 15-yard line with 3:47 left and covered the 85 yards in seven plays but couldn’t get the final 2-point conversion to tie the game.

Jefferson was 23-of-37 passing for 284 yards — 109 in the fourth quarter –with two touchdowns and two interceptions for Arkansas..

The Flames, who lost leading rusher Dae Dae Hunter to a leg injury in the first half, ran for 91 yards.

The Hogs were held to only 144 on the ground, just the second time they have failed to top the 200-yard mark this season.

The Flames followed a partially blocked punt with a 59-yard drive capped by Bennett’s 16-yard touchdown pass to Noah Frith and then needed to negotiate just 53 yards for their second score when Arkansas failed to convert a fourth-and-5 at Liberty’s 47-yard line. Bennett’s 20-yard strike to Douglas completed the drive.

Bennett finished the drive off with an 18-yard pass to Treon Sibley.

Arkansas’ only first-half points came on Cam Little’s 50-yard field goal on the final play of the second quarter.