No. 25 Liberty wins in unbelievable fashion versus Virginia Tech 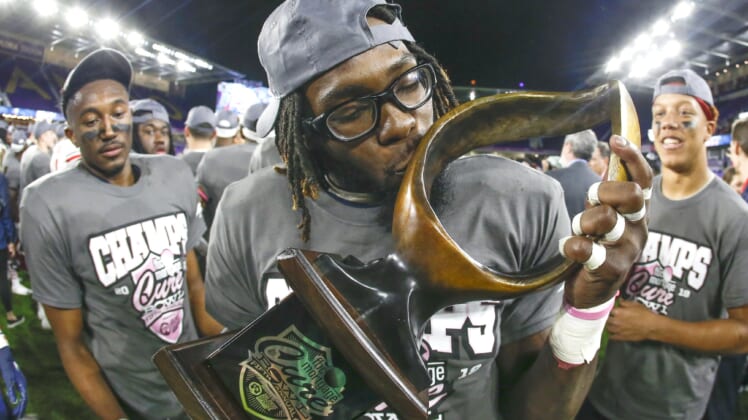 Week 10 of the college football season was the epitome of greatness around the nation. No. 1 Clemson went down to No. 4 Notre Dame in thrilling overtime fashion. No. 8 Florida beat rival No. 5 Georgia after going down 14-0, and No. 13 Indiana added gasoline to Michigan’s head coach, Jim Harbaugh, hot seat. These are just some of the storylines, but one of the most underrated games of week 10 was No. 25 Liberty scraping by versus Virginia Tech.

Despite being ranked the 25th team in the country, there were questions surrounding the Flames. The team’s schedule has been lackluster so far. Western Kentucky gave the Flames the closest game of the season, only losing to Liberty by six. The rest of Liberty’s schedule has been against below-average competition, and the real test would be Virginia Tech.

Liberty’s change of pace was the X-Factor

Liberty’s offense is a high-pace, high-octane unit. The team plays fast and puts up points rapidly. However, Liberty’s offensive philosophy changed for this game. Liberty understood that time of possession would be key in the game against Virginia Tech. The Flames would move methodically and efficiently on offense.

Liberty’s first touchdown drives were slow and efficient. Both took over six minutes each, and the change of pace seemed to stump Virginia Tech’s game plan.

If it was not for turnovers, Liberty would have run away with the game. Liberty’s quarterback Malik Willis fumbled with over five minutes left in the second quarter, and the Hokies capitalized with a touchdown.

The following possession for the Flames would yield the same results. Willis would fumble in the red zone, and Virginia Tech would get a field goal off the turnover. The two fumbles would create a 10-point swing.

Both quarterbacks carried the offenses

However, the plays both made on the ground are what kept both teams alive. Willis rushed 19 times for 108 yards. He made big play after big play for the Flames. Hooker seemed unstoppable with the absence of star running back Khalil Hebert, rushing 20 times for 156 yards.

The crucial timeout that lost Virginia Tech the game

Eight seconds left in the game and Liberty lined up for a 59-yard field goal. The kick was blocked and Virginia Tech took it all the way back for the touchdown. Virginia Tech apparently won the game in unbelievable fashion. That would have been the conclusion of this article. However, head coach Justin Fuente called a timeout for the Hokies.

The timeout seemed to suck the energy out of the stadium. With eight seconds left, Liberty’s offense comes back onto the field, and the Hokies decide to protect the end zone. However, the defense leaves a Liberty wide receiver wide open for the first down and allows him to get out of bounds.

The eight-yard completion would give kicker Alex Barbir another shot to win the game. This time from 52 yards away, he nailed it. Liberty beats Virginia Tech 38-35. The final seconds of the game seemed to last a lifetime but showed what college football is all about. Chaos.