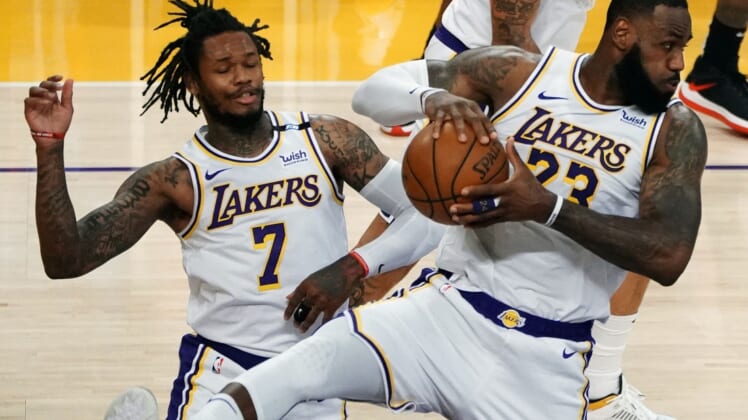 May 2, 2021; Los Angeles, California, USA; Los Angeles Lakers forward LeBron James (23) gets a rebound in front of guard Ben McLemore (7) against the Toronto Raptors during the second half at Staples Center. Mandatory Credit: Gary A. Vasquez-USA TODAY Sports

James departed the 121-114 loss to the Toronto Raptors with 6:42 remaining in the contest.

“His ankle is battling some soreness,” Los Angeles coach Frank Vogel said afterward. “We decided not to bring him back.”

James was playing for the second time since missing 20 games due to the injured ankle. He said it has tightened up on him at halftime in both games.

Vogel and James were both in wait-and-see mode per whether the star forward could play against Denver.

“The plan is to see how I feel and go from there,” James said.

James also was thinking about the big picture.

“The most important thing for me is to be healthy and be at full strength when it really matters,” James said.

James recorded 19 points, seven rebounds and six assists against Toronto as the slumping Lakers lost for the sixth time in seven games. They are 0-2 since James returned.

“I think our team is predicated on health,” James said. “That is the No. 1 thing for our ball club. We need to be healthy and we need to be at full strength.”