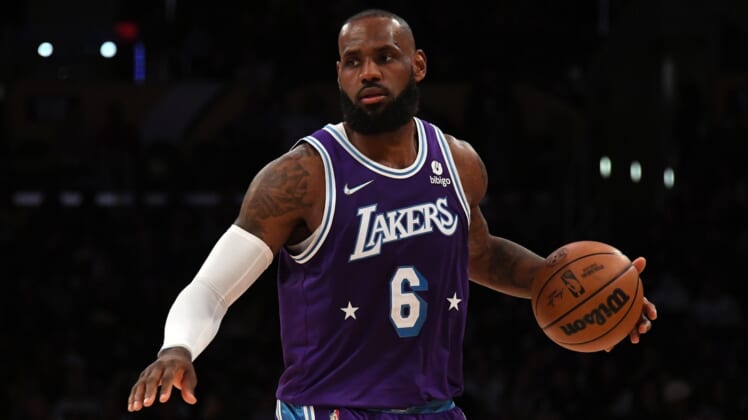 LeBron James scored 33 of his 50 points after halftime and the Los Angeles Lakers pulled away for a 122-109 victory Friday over the visiting Washington Wizards.

James shot 18 of 25 from the field and 6 of 9 from 3-point range as the Lakers won for just the second time in eight games. In the only other victory during that stretch, James had a season-best 56 points on March 5 in a home victory over the Golden State Warriors — his only other 50-point game of the season.

James became the first Lakers player with multiple games of 50 points in a season since Kobe Bryant in 2007-08. He reached the 50-point mark on a 3-pointer with 1:41 remaining.

Malik Monk had 21 points for the Lakers, while Talen Horton-Tucker added 15. James had six assists, leaving him two shy of 10,000 for his career.

Former Laker Kyle Kuzma had 23 points and rookie Corey Kispert scored a career-best 21 for the Wizards, who lost for the fifth time in seven games. Rui Hachimura had 15 points, while Kristaps Porzingis had 14 points and 14 rebounds in just his third game with Washington.

After a first quarter that ended in a 26-all tie, the Lakers held a one-point lead with just over four minutes remaining before halftime. However, the Wizards closed on a 10-2 run to take a 59-52 lead into the break.

The Lakers took an 89-82 lead into the fourth quarter and grabbed their first double-digit advantage of the game at 103-93 on a James basket with 5:48 remaining.

Lakers forward Anthony Davis, who celebrated his 29th birthday Friday, missed his eighth consecutive game with a foot sprain, while also sitting out his 29th game overall this season. The Lakers are 2-6 in the past eight Davis has missed.