We already know all about King James’ business interests off the court. That includes a lifetime contract with Nike, a leadership role in the production firm Springhill Entertainment and various equity in restaurant chains throughout the world.

Apparently, James does not want to stop there. Appearing on “The Shop” recently, James indicated that he would like to own a team. In particular, “I want a team in Vegas,” James said.

The four-time NBA champion also responded “speak it into existence.”

Related: LeBron James interested in playing for the Warriors?

Speaking ahead of Game 1 of the NBA Finals, NBA Commissioner Adams Silver noted that the league has not been discussing expansion to either Vegas or Seattle. He added that the NBA will ultimately expand beyond its 30 teams at some point and offered up great things to say about both cities.

Las Vegas has become a realistic option following the smashing success of the NHL’s Golden Knights and the NFL’s Raiders moving from Oakland back in 2020. The city’s WNBA team, the Las Vegas Aces, also enjoys a tremendous amount of success and is headed by the widely popular Becky Hammon. 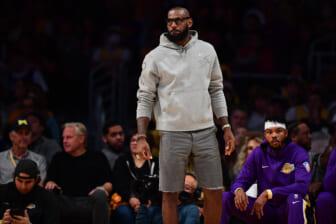 As for LeBron James, it’s not a surprise that he might want equity in an NBA team. One of the reasons he left the Cleveland Cavaliers for Los Angeles back in 2018 was the market it could provide him after his playing career. With a net worth of over a billion and a revenue stream with no end in sight, he could end up being able to afford it.

In this scenario, the NBA would be doing cartwheels if it were able to land someone of King James’ ilk to be the face of an ownership group in Las Vegas. Simply put, that would expand the Association’s brand.