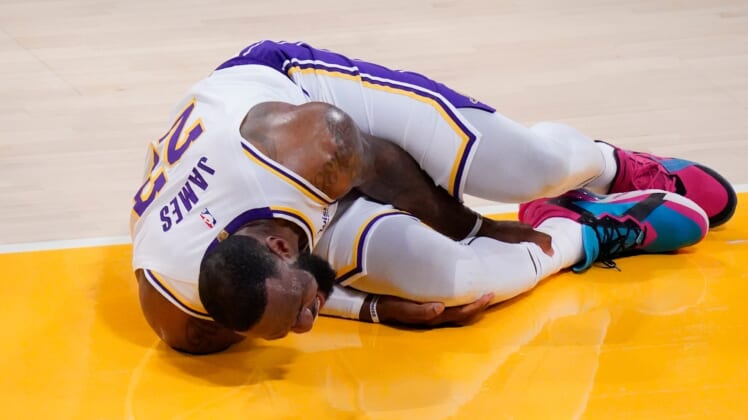 Early in the second quarter against the Atlanta Hawks, LeBron got the ball knocked loose from his possession. As he recovered, making a play to feed the ball to Alex Caruso, that’s when his ankle got rolled on. Hawks forward Solomon Hill went low for the ball, diving right into James’ ankle and catching his foot.

LeBron immediately went down in pain and stayed on the floor for several minutes. Eventually, he got up and went with trainers into the locker room. Not long after his departure, the Lakers ruled James out for the remainder of the game due to a right ankle injury.

According to The Athletic’s Shams Charania, an MRI diagnosed James with a high-ankle sprain. While the severity of the injury isn’t known, the reigning NBA Finals MVP will be out indefinitely.

Before departing, the 36-year-old had been playing well with 10 points and four assists in 11 minutes. Entering Saturday’s action, LeBron was averaging 25.8 points, 8.1 rebounds and 8.0 assists per game. With Joel Embiid sidelined, James had an opportunity to make up ground in the NBA MVP race.

The Lakers have been quiet to this point with the NBA trade deadline looming. While they weren’t expected to land a marquee player before the March 25 deadline, Los Angeles will be very active in the buyout market.

The severity of James’ injury could have a huge impact on what comes next. With both stars sidelined, the Lakers will be relying on Kyle Kuzma, Montrezl Harrell and Dennis Schroder to do the heavy lifting. Given this team has been carried by its best players for the past two seasons, it creates new concerns.

Los Angeles will likely remain in the market for a center, but there will be competition. If the Cleveland Cavaliers buyout Andre Drummond, it’s expected to come down to the Lakers and Brooklyn Nets.

Los Angeles seemingly had interest in DeMar DeRozan, but the team is already pressing against the hard cap and doesn’t have a ton of roster flexibility or future draft capital. As a result, with injuries mounting, things are about to get a lot worse for the Lakers.

Before Saturday’s game, the Lakers had a four-game winning streak and were climbing back towards the top in the West. With both LeBron James and Anthony Davis out multiple weeks, Los Angeles will likely lose ground quickly in the NBA standings and see its grip on the No. 2 seed slip away.

The injury might greatly diminish LeBron’s chances of winning MVP. But, as long as he and Davis are back for the playoffs, the Lakers should feel comfortable.