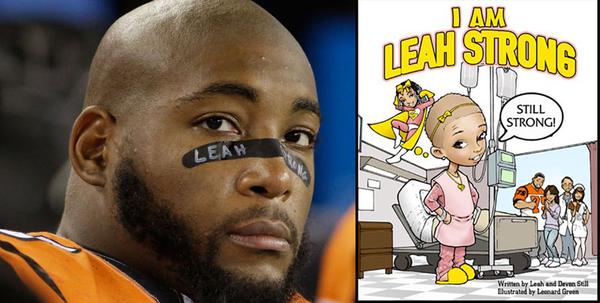 During the 2014 NFL season, there was one little girl who captured the imagination of fans around the sport.

Leah Still, the daughter of Cincinnati Bengals defensive tackle Devon Still, made news last summer as she was battling cancer. In turn, the Bengals, who had released Still, decided to give him another opportunity on the team’s practice squad. That was in large part to help Still pay for his daughter’s treatment. It was a class gesture from the Bengals.

As the 2014 season progressed, Leah started to receive more attention from the media, fans and even Bengals’ opponents. It was like one community came together to help this sweet little girl through a part of her life that most of us couldn’t even imagine.

Then, back in March, Devon announced that his daughter’s cancer was in remission. It was an amazing turn from the summer months when Leah was diagnosed with Stage 4 Neuroblastoma, a cancer with potentially fatal consequences.

Knowing that they aren’t the only family to go through such a difficult time, Devon and Leah have released a children’s book, I am Leah Strong, to help others struggling with cancer.

As the NFL Players Association indicated, “a portion of the proceeds will be used to help families who are dealing with pediatric cancer.”