The Sacramento Kings traded two pretty lofty contracts, their top-10 pick from last June and a future first rounder to the Philadelphia 76ers in a clear cost-cutting move on Wednesday night—a move that clears about $16 million in cap space.

By sending Carl Landry, Jason Thompson and Nik Stauskas to Philadelphia for overseas players and a future second-round pick, Sacramento made it clear it is going to be a player in free-agent market this summer.

It’s also going to do so amid a questionable future and with free agents forcing the team to overspend:

Sacramento can clear cap space, but Kings are starting to understand: They'll have to overpay to bring players into that chaotic situation.

It would be a bold move for a contending team that’s one player away from a championship run. For the Kings, it’s a shot in the dark—a blind throw at the dartboard. Sacramento is now rumored to be interested in Monta Ellis and Rajon Rondo—two enigmatic figures who wouldn’t bring the team close to contention in 2015-16 and into the future.

As SI reported yesterday: Kings ownership wants Rondo/Ellis. Jeremy Lin on the radar, too. At this point, Wes Matthews price too high.

On the heels of the drama surrounding George Karl and the team’s front office, it appears the two sides are again at odds. This, in the midst of the Kings dealing with a malcontent in the form of DeMarcus Cousins.

There remains a massive difference of opinion between what George Karl thinks is what is best for the team and what Vivek/Vlade are doing.

More so than the disconnect here, Sacramento just gave up on the eighth overall pick in last year’s draft to potentially bring in one or two overpriced veterans with rather lofty histories of issues with their previous teams. In the process, the Kings will likely have to overpay for anyone to make the decision to join the team.

Prior to selecting Willie Cauley-Stein with the sixth pick last week, here is what the Kings last eight drafts look like. Players currently on the roster are denoted in red boxes: 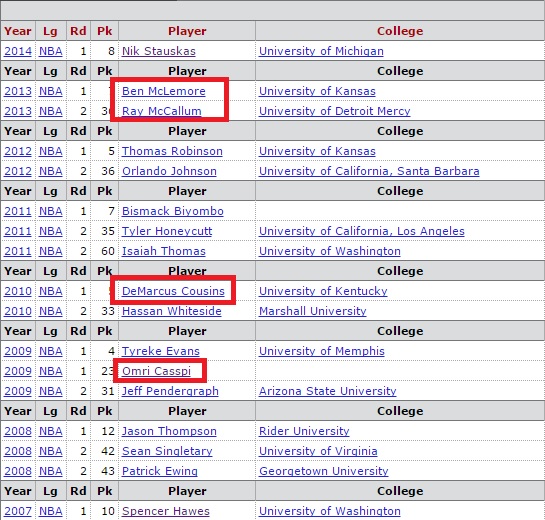 You aren’t going to win many games with a draft history like that. You most definitely aren’t going to be competitive when you give up on a former top-eight pick after just one year. That’s only magnified when said player was dealt for the possibility of overpaying for an over-valued free agent in a market that seems to be overpaying all over-valued free agents. See what I did there?

Let’s say for a second that Sacramento lands both Monta Ellis and Rajon Rondo? Where does that leave the team in the ultra-competitive Western Conference? Is a starting lineup consisting of Ellis, Rondo, Cousins, Cauley-Stein and Rudy Gay a top-eight team in the conference? Is it even a top-10 team in the conference? Giving up future assets (and let’s be honest, Thompson and Landry would have been assets as expiring contracts), isn’t worth it when you are replacing them with players unable to lead your team into contention. Winners of 29 games last year, that hypothetical lineup mentioned above won’t even come close to scratching a .500 record.

Then you have this:

Kings have about $10 million in cap space, and belief league-wide is that Rondo wants all of it. Still: Who is Sacramento bidding against?

Okay, that’s now at $25 million after the trade with Philadelphia.

But you still have this:

So now the Kings gave up future assets to target a malcontent who wants $10 million-plus on a one-year deal and will bolt from the fledgling organization next summer.

Short of being able to lure someone of LaMarcus Aldridge’s ilk to the team, Sacramento would be in a better position to take up the philosophy of the team it traded with Wednesday night. That is to say, attempt the long-term rebuild and don’t throw money at overrated veterans.

As with the George Karl hiring just a few short months ago, it appears this organization isn’t prepared to look at the long term. Instead, it’s intent on attempting to contend when contention itself is so far away.

That’s the one major takeaway from this absurd deal.