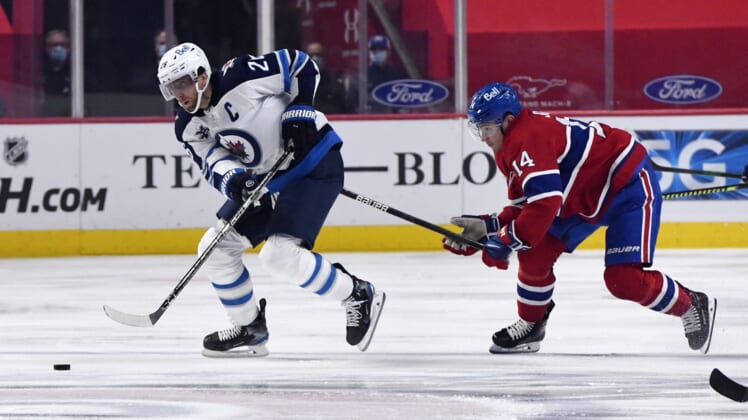 Nick Suzuki scored twice, including the third-period game-winning goal, to lead the host Montreal Canadiens over the Winnipeg Jets to a crucial 5-3 comeback victory on Friday.

With the win, Montreal has a six-point lead on the Calgary Flames in the chase for fourth place — worth the final playoff spot — in the North Division. Both teams have seven games remaining.

Trevor Lewis scored twice, while Paul Stastny added a single and goalie Connor Hellebuyck stopped 30 shots for the Jets (27-20-3, 57 points), who are on a six-game losing skid. Winnipeg remains three points behind the Edmonton Oilers for second place in the division and four points ahead of Montreal.

With the score tied and overtime looming, Suzuki netted his team’s second power-play goal when his point shot made it through the screen set by Corey Perry with 4:50 remaining in regulation. It was a big comeback for a struggling club that’s watched its hold on a playoff position become tenuous.

Trailing 3-1 past the midway point, the Canadiens scored four unanswered goals. Lehkonen made it a one-goal game at the 13:44 mark of the middle frame with a short-side shot off the rush, and Armia’s power-play goal tied the affair with 1:46 left in the frame.

Toffoli rounded out the scoring with an empty netter to complete a critical comeback.

It was another bitter defeat for the struggling Jets, who were staked to a 3-1 lead thanks to Stastny’s late first-period goal and saw Lewis tally twice in the second period.

After Lewis made it a 2-0 game, Suzuki’s goal that ran his streak to three games put the Canadiens on the board. During a broken play, Suzuki grabbed the loose puck and snapped a quick shot into the net.

Lewis made it a 3-1 game with his second of the night on an individual effort. After grabbing the puck in his own zone to create a two-on-one rush, he sent a short-side shot home for his fifth of the season at the 11:47 mark of the second period. It was all Montreal after.