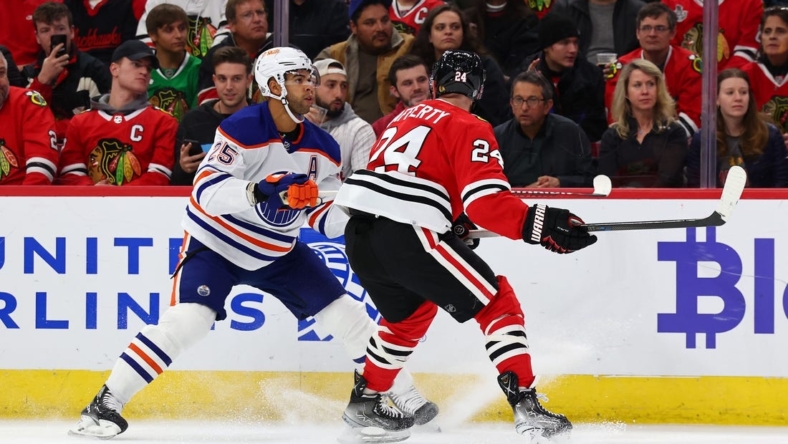 Leon Draisaitl scored the go-ahead goal with 38 seconds left and captain Connor McDavid recorded his second hat trick of the season to fuel the visiting Edmonton Oilers to a 6-5 victory over the Chicago Blackhawks on Thursday.

Chicago’s Patrick Kane cleaned up a rebound to forge a 5-5 tie with 3:11 remaining in the third period before Edmonton answered in the final minute.

Evander Kane’s cross-slot feed sailed past Blackhawks defensemen Caleb Jones and Seth Jones to an unmarked Draisaitl, who celebrated his 27th birthday with his fourth goal of the season.

McDavid scored twice during an eight-minute stretch in the second period before deking Chicago defenseman Jake McCabe and beating goalie Alex Stalock between the pads to give Edmonton a 5-4 lead midway into the third. McDavid has a team-leading eight goals on the season.

Edmonton’s Ryan Nugent-Hopkins matched Draisaitl with one goal and two assists, and Zach Hyman scored his third goal in as many games. Jack Campbell finished with 31 saves for the Oilers, who went 3-for-7 on the power play to win their third straight game.

Chicago’s Max Domi scored on a five-on-three power play and added two assists, and Kane also had a goal and two assists. Captain Jonathan Toews, Andreas Athanasiou and Reese Johnson also tallied and Stalock turned aside 32 shots for the Blackhawks, who went 2-for-10 on the power play as their four-game winning streak ended.

Evander Kane was whistled for an unsportsmanlike-conduct penalty after chirping from the bench to give Chicago a five-on-three advantage late in the second period. Domi made the Oilers pay by blasting a shot from the edge of the left circle past Campbell to give the Blackhawks a 4-3 lead with 3:14 left before the second intermission.

Nugent-Hopkins forged a tie 24 seconds into the third period by converting Draisaitl’s feed for a power-play goal.

McDavid wired a hard diagonal pass to set up a one-timer by Hyman to open the scoring midway into the first period.

Athanasiou scored on a breakaway nearly three minutes later, and Johnson cleaned up a rebound to give Chicago a 2-1 lead with 4:22 left in the first period.

McDavid sandwiched goals around Toews’ deflection of Domi’s shot-pass at 1:33 of the second period.