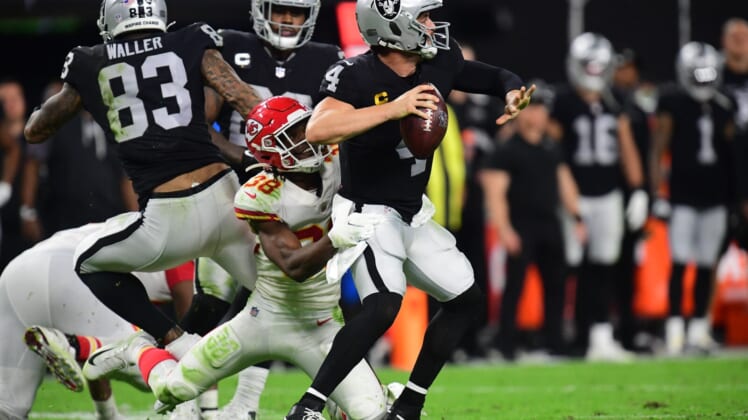 A battle for first place commenced on primetime for Sunday Night Football between the Las Vegas Raiders and the Kansas City Chiefs inside Allegiant Stadium with the other two teams in the AFC West losing earlier in the day.

The Raiders could not keep up with the reigning AFC Champions, as they lost 41-14 to the Chiefs, who generated over 500 yards of offense.

“It was a very disappointing performance today by all of us,” interim head coach Rich Bisaccia said. “If you start, we were minus again in the turnovers, way too many penalties (and) untimely. We had fourth down penalty, third down penalty. Flip it around on defense, had a penalty in the red zone.

After an opening drive touchdown to get within three points in the third quarter, Las Vegas could not muster a single point, enroute to the 27-point loss.

Turnovers, penalties and time of possession went against the Raiders way as quarterback Derek Carr completed 25-of-35 passes for 261 yards, two touchdowns and an interception.

The 6-foot-3 captain said he still feels optimistic in the team as the season rolls on.

“The things that we messed up on today are so correctable,” Carr said. “It doesn’t feel like we got outmanned. I really believe that this group is just different. I’m around them every day. It’s just a different group.”

The first turnover came from newly acquired wide receiver DeSean Jackson after he recorded his first catch as a member of the Silver and Black for 38 yards. However, after he caught the ball with two guys around him, the ball was punched out and the Chiefs recovered the fumble.

Kansas City (6-4) would then go down the field and kick a 35-yard field goal to take a 13-point lead with 1:12 left in the third quarter to keep it to a two-possession game. The field goal was part of a stretch of four straight drives where the Chiefs totaled 27 straight points.

The interception came on the following Las Vegas possession as it turned costly, eventually leading to a 38-yard touchdown pass from Chiefs quarterback Patrick Mahomes to running back Darrel Williams on third-and-11 to extend the lead to 34-14 with 13:11 left in the game.

In addition, the Raiders (5-4) got hurt in the penalty game as they committed nine penalties for 68 yards.

“I felt like it was just a matter of execution,” wide receiver Bryan Edwards said. “We were shooting ourselves in the foot all game, whether it was pre-snap penalties or just not doing the right thing assignment wise, it’s just execution.”

Furthermore, Las Vegas had the ball offensively for just 40% of the time as AJ Cole punted five times.

Immediately after Cole’s second punt, the third-year player used his physicality as he was the first Raider to get to Chiefs’ punt returner Mike Hughes and got the football free – for his first career forced fumble – as tight end Foster Moreau recovered the ball to continue the drive.

However, the fumble recovery on the punt return came with sacrifice as fullback Alec Ingold was carted off with a knee injury.

Following a defensive pass interference against Kansas City, Carr found wide receiver Hunter Renfrow for a 6-yard score to tie things up 7 just a few minutes into the second quarter.


That would the Raiders’ lone score of the first half.

Bisaccia said Renfrow continues to his consistency in the receiving game as the team reaches the midway point.

“Hunter’s had a really prominent role as we’ve been playing all year,” Bisaccia said. “And then some things opened up on some of the routes on the outside for Bryan to get open today.”

The Raiders only good drive in the second half came on its opening drive. Las Vegas scored on a 37-yard touchdown pass from Carr to Edwards to cut deficit to three. This came immediately after finding Zay Jones for a 22-yard pass.

Both completed passes were credit to tight end Darren Waller and Jackson, who were used as decoys to open the middle of field for Jones and Edwards.

In addition to the touchdown, Edwards recorded three receptions on four targets for a team-high 88 yards.

The Raiders are still in the hunt and currently the hold the No. 9 spot in the AFC playoff picture.

Up next, Las Vegas stays home and hosts the Cincinnati Bengals – who are at No. 8 in the conference playoff standings – at Allegiant Stadium on Nov. 21 at 1:05 p.m.