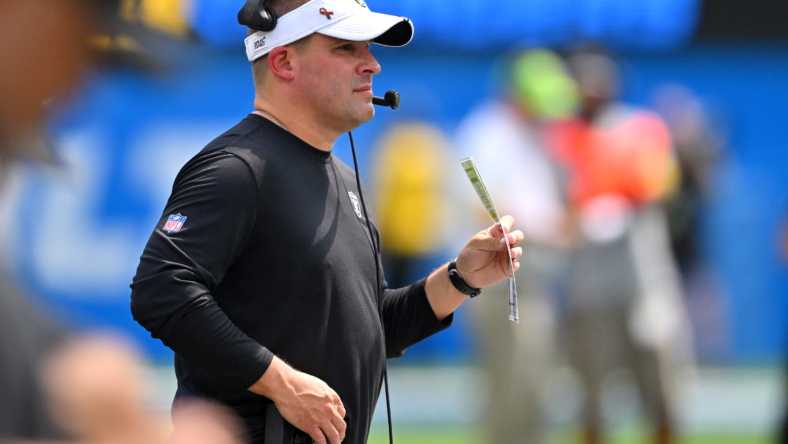 The Las Vegas Raiders have the worst record in the NFL entering Week 4 as the only 0-3 team, and they can blame themselves more than their opponents who have fallen behind or given the Silver and Black every opportunity to complete a comeback.

This past offseason, head coach Josh McDaniels preached about learning how not to lose games. Well, he didn’t teach his players how to win them either. On top of that, general manager Dave Ziegler didn’t equip this team with enough quality depth to patch up weaker positions on the roster.

While the Raiders looked good in the preseason against second- and third-stringers and some New England Patriots starters, those performances masked legitimate problems the team has faced through the first three weeks of the 2022 regular season.

Let’s start with the most glaring miscalculation—the offensive line.

Shuffling backups along the offensive line

Yes, the Raiders rank 10th in scoring, so the offensive line hasn’t prevented them from putting points on the scoreboard, but the guys up front have committed untimely penalties that stalled drives, and the unit has been flagged far too many times three games into the 2022 campaign.

According to Pro Football Focus, Thayer Munford Jr., Jermaine Eluemunor, Dylan Parham and Alex Bars have all committed at least two penalties with nine in total.

As rookies, Parham and Munford will go through growing pains, but the Raiders’ coaching staff hasn’t helped those youngsters with the constant changes to the five-man lineup.

Aside from the decision to insert Parham at center in place of Andre James, who suffered a concussion in Week 1, the coaching staff has voluntarily hurt continuity across the front line with substitutions at right guard and right tackle. Before Week 3, Lester Cotton Sr. and Parham split snaps at guard while Eluemunor and Munford split snaps at tackle.

How can a pair of rookies settle into those spots with interrupted repetition?

We shouldn’t be surprised to see them struggle with penalties because they’re obviously inexperienced in inconsistent roles. That’s common sense—and something the coaching staff must address going forward. Barring injuries, teams put the best five men in those positions for a reason. Ideally, you want them to build chemistry and work together as a cohesive unit. They cannot do that with intermittent snaps. 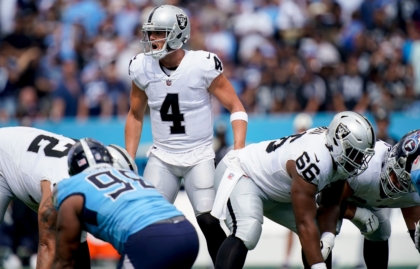 On top of an unsettled offensive line, the Raiders failed to adequately address the position group, which had its issues last season.

In Week 3, the coaching staff plugged Alex Bars into the starting lineup in place of left guard John Simpson to go against Pro Bowler Jeffery Simmons and fellow defensive tackle Denico Autry. Just remember, the coaching staff cut Bars before final cuts. So apparently, he wasn’t good enough to make the initial 53-man roster, but the Raiders expected him to hold up against a duo that combined for 17.5 sacks last season. Unsurprisingly, Bars struggled; he committed two penalties and allowed two pressures Sunday.

The Raiders have to face Kansas City Chiefs three-time Pro Bowl defensive tackle Chris Jones twice a year and Aaron Donald is on the schedule this season, and they’re calling on Bars as a veteran substitute to play next to a rookie center in Parham? Most could’ve predicted how the former Chicago Bears backup would fare against Simmons and Autry, but somehow team brass thought the move would work in the previous outing.

Failure to address the interior of the defensive line

Aside from Maxx Crosby, the Raiders don’t have anyone to push the pocket on the defensive line. While Chandler Jones’ subpar performances may have caught Ziegler by surprise, he could’ve at least beefed up the interior of the defensive line with a proven veteran after rookies Neil Farrell Jr. (fourth-rounder) and Matthew Butler (fifth-rounder) had an underwhelming offseason.

Farrell and Butler didn’t flash until the final preseason game. Yet the Raiders went into Week 1 with all of their hope in Johnathan Hankins, Bilal Nichols, Andrew Billings and Kendal Vickers on the inside.

Farrell hasn’t dressed for a game yet, and Butler has played five defensive snaps. Hankins turned 30 years old in March, missed a big chunk of the offseason program, and he’s played 44 percent of the defensive snaps—his lowest snap count rate since his 2013 rookie year. Billings has played well, but he’s only taken 192 defensive snaps over the past two years. Vickers has served as a backup for three seasons.

While Nichols has potential, he’s recorded just four tackles in three games fresh off a new two-year, $11 million contract with a $7.1 million in guaranteed money. 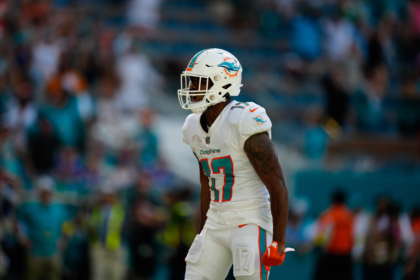 Vegas needs a game-changer alongside Crosby, and that player isn’t on the roster. So as a result, the Raiders’ best defender will continue to take a tough pathway to the quarterback through double-teams because Jones isn’t commanding any additional attention on the other side.

Lack of commitment to the ground game

During the offseason, McDaniels seemed to make a concerted effort to breathe confidence into the ground attack, but he’s curiously ignored or underutilized it in the regular season.

In the 2022 draft, Vegas selected running backs Zamir White and Brittain Brown in the fourth round and seventh rounds, respectively. Through three regular-season games, the former has one carry for two yards; the latter hasn’t suited up for a game. Instead, McDaniels has relied on 32-year-old Brandon Bolden as the No. 2 back behind Josh Jacobs.

During the preseason, McDaniels used multiple backs to establish the ground game, which indicated he would field a balanced attack. On the contrary, the Raiders have the fewest rush attempts with the fifth-fewest rushing yards going into Week 4.

Let’s take a look at the rushing numbers from each of the first three games.

Even though the Chargers jumped out to an early lead on the Raiders, they didn’t go up two scores until 35 seconds before halftime. Yet in the first half, Jacobs only ran the ball five times against the 30th-ranked run defense from the 2021 season. That’s poor game-planning.

In Week 2, the Raiders faced the Cardinals, who allowed 128 rushing yards to the Chiefs in the previous week. Kansas City had a commanding lead and milked the clock away with its ground attack, feeding rookie seventh-rounder Isiah Pacheco.

With a 20-0 lead over the Cardinals, McDaniels didn’t run the ball enough. The Raiders tried to move the ball through the air on three consecutive downs and burned just 24 seconds on the game clock with a 23-7 advantage at the beginning of the fourth quarter, which shows poor in-game situational awareness. 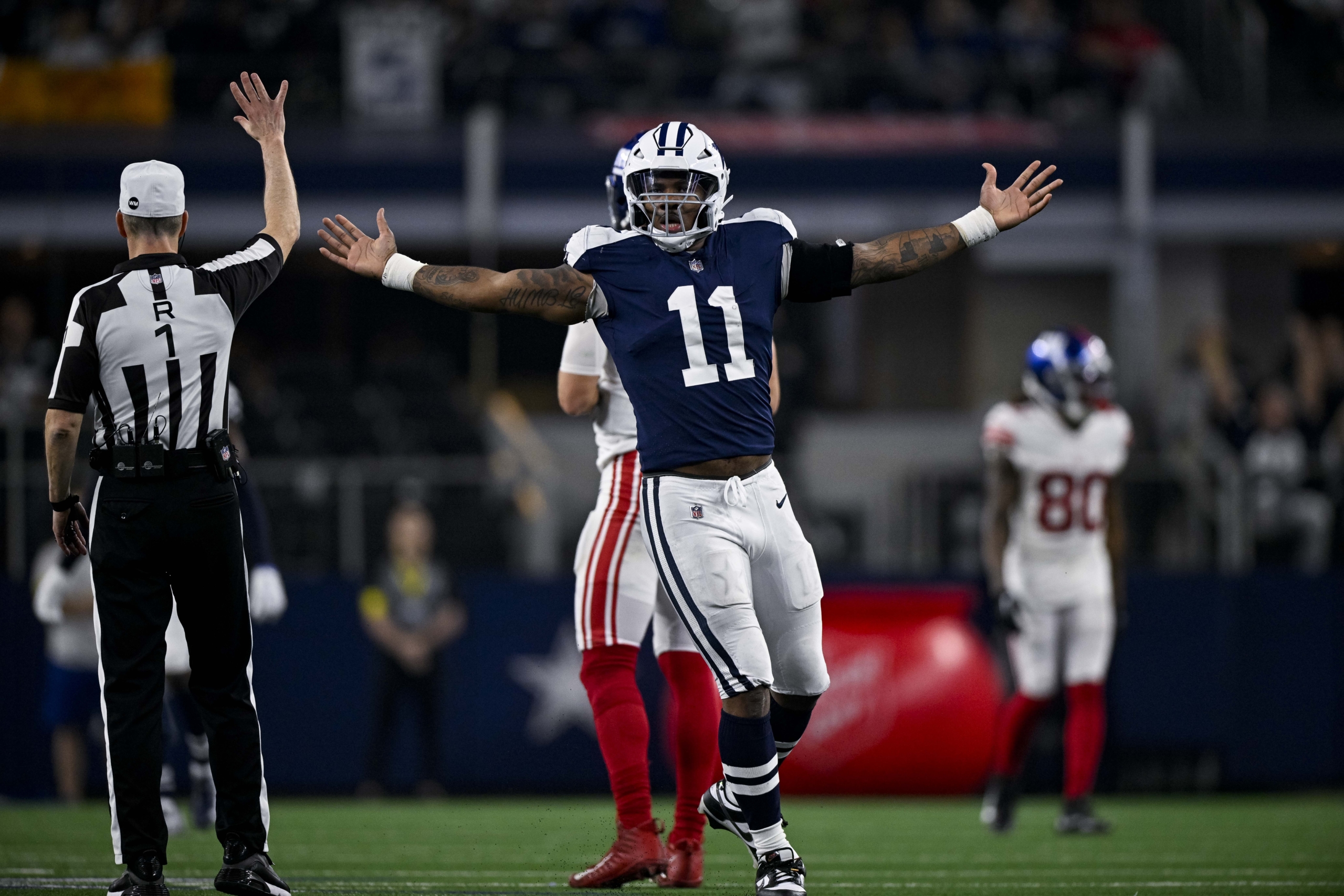 On Sunday, against a Titans defense that allowed the second-most rushing yards heading into Week 3, the Raiders came out with a wide receiver reverse for Davante Adams on the opening drive. McDaniels pulled all sorts of trick plays out of the bag when he should’ve kept it simple with the game in reach.

Though Jacobs battled an illness before Sunday’s game, McDaniels should’ve fed White, who didn’t have one offensive snap against the Titans, or called up Brown to form a platoon in the backfield capable of exploiting Tennessee’s weakness up front. The Raiders ran the ball well but lacked volume in carries early and when they tightened up the score.

With all that said, players must execute, too. Tight end Darren Waller had his hands on a few passes that he couldn’t haul in for big plays, but McDaniels has to make better use of the run game, which would improve the Raiders’ awful 26th-ranked red-zone offense.

Barring trades and signings (defensive tackle Ndamukong Suh is still available), the Raiders must work with whom they kept on the roster after final cuts. In conjunction, McDaniels must do a better job of utilizing his talent, specifically in the running back room.

Let’s see if McDaniels truly learned some lessons from his head-coaching tenure with the Denver Broncos and adjusts to address his blind spots.