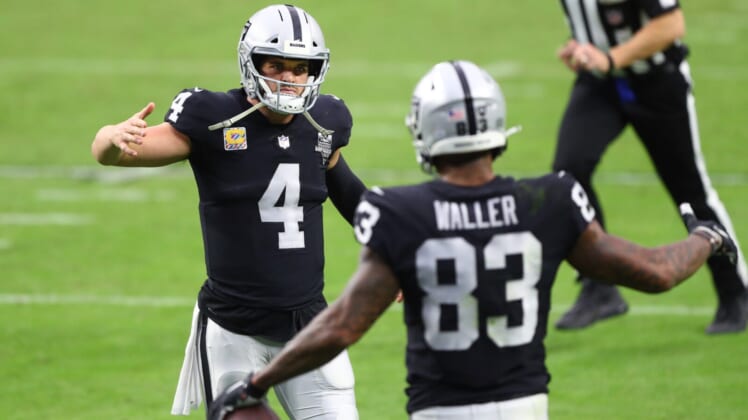 The Las Vegas Raiders get set to take on the Cincinnati Bengals Sunday afternoon at 1:05 p.m. PST inside Allegiant Stadium.

This game marks the 31st meeting between these two teams and first since 2019 when the Raiders defeated the Bengals for the first time in 10 years, 17-10 in Oakland.

Here are four keys to a Raiders win against the Bengals:

During the team’s first game this season, tight end Darren Waller recorded 10 receptions on 19 targets for 105 yards and a touchdown in a game where it looked like he picked up right off from what he did in 2020.

Waller said the nearly two dozen targets was a birthday gift from quarterback Derek Carr as it was against the team that drafted him, the Baltimore Ravens.

“I can honestly say it was probably too many,” Waller said. “There were some where we want to make plays and I’m going to make a play. It was my birthday, it was the Ravens, so I understand the situation, but 19 is probably a little much but the number is always going to change. I can’t go into a game with a fixed number in my mind.

“It’s not attaching it to a number but realizing what can I do with each and every one and make each one quality us my approach.”

In the next three games – at Pittsburgh, against Miami and at Los Angeles against the Chargers – Waller saw seven targets in each game.

Another part of it is the defense increasing its awareness for Waller.

Waller said he is continuing to do his prep of not only watching film on the defense, but also of other premier tight ends who continue to see the same volume.

“It’s really studying other guys and how they deal with similar levels of attention and still do the same things that they do,” Waller said. “Is it lining up in more places? Is it learning more routes? If it’s three people or two people in the area, is it attacking one to then create space off of another?

“It’s real intricate things like that that are very new to me, but I’m trying to put a plan together every single week and attack it. They’re making to the point where I’m not supposed to win. They’re trying to take it away. But you know me, I’m competitive. I still don’t want that to be the final narrative.”

2. Continue to increase the Carr-Jackson connection

This week marked wide receiver DeSean Jackson’s first full week with the Raiders. After learning the playbook this past week, with a set a plays for him last week, interim head coach Rich Bisaccia said Jackson continues to adapt and adjust to his passing routes.

“He’s been a quick study, been around a long time. He’s a really bright guy. So, I think he’s done a good job to get himself where we can get more looks for him.”

Seconds prior to the fumble, Carr and Jackson connected for a 50-yard pass before it was broken up and given to Kansas City in last week’s 41-14 loss.

However, the pass completion is a step in the right direction to build the trust between the two within the season’s final eight weeks in addition to a playoff opportunity for the Raiders.

“I think professionally, those things are difficult when you get a guy in the middle of a movie to come in and do that,” Bisaccia said. “He’s a pro and Derek is such a pro. And Derek wants the best outcome for our offense. They did a good job getting together off to the side when we were in the defensive set. They did a good job of meeting to some degree.”

The Bengals are led by running back Joe Mixon and a young quarterback in Joe Burrow, who can check it down to Mixon or throw it out to one of his receivers.

Mixon ranks ninth in the NFL with 636 rushing yards and ranks tied for fourth with seven rushing touchdowns.

In the passing game, Burrow is able to throw the ball to receivers Tee Higgins, Tyler Boyd and Ja’Marr Chase.

With Chase and Burrow already having the trust from their National Championship days as teammates at LSU, both have helped elevate their game, early in their professional careers.

Among all NFL pass catchers this season, Chase ranks fifth with 835 receiving yards and ranks tied for fifth with seven receiving touchdowns.

Not only can Chase catch balls close, but he has the ability to catch the long ball and extend plays. Chase is third in the NFL with 14 receptions that have gone for more than 20 yards and rank tied for first with six plays that go further than 40 yards.

“What Joe Burrow has been able to do in play action and with their young receivers in which they’re playing on the outside presents big problems,” Bisaccia said. “The play action game has become really something to pay attention to and they’ve had some explosive plays.”

4. Be prepared for two games in five days

The Las Vegas Raiders will enter a stretch, beginning on Sunday, where they play two games in a span of five days, which includes travelling to Dallas to face the Cowboys on Thanksgiving.

As a result, Bisaccia scheduled practice time Friday afternoon to prepare for the Cowboys prior to tomorrow’s matchup against the Bengals.

“Well, I think coaches have done some preparation, some pre-preparation,” Bisaccia said. “The players just went through what we call a ‘fast and a finish Friday.’ That was really well done by the players. Hopefully have a really good day tomorrow of preparation and get ready to play the Cincinnati Bengals here on Sunday.”

The players, who are used to playing every seven days, now have to prepare even faster during the week with a 1:35 p.m. start on Thursday in Dallas. For tomorrow, the Raiders and Bengals kick of at 1:05 p.m. and will be televised on CBS.