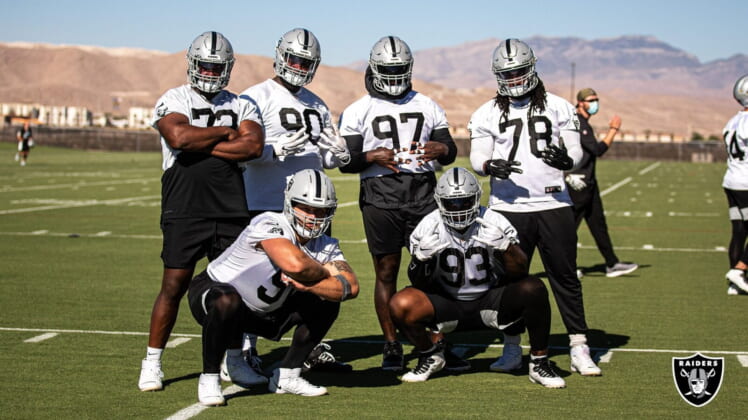 HENDERSON, Nev. – Las Vegas Raiders coach Jon Gruden met with the media virtually again Wednesday to talk about his team as they pick up activity during this odd and surreal NFL training camp.

“Well there’s three things that we have to do in my opinion,” Gruden said. “We’re all way behind in the NFL because we didn’t have Spring practice.”

“Obviously, we have to teach our scheme – offense, defense, special teams,” Gruden said.

And while that seems like a given, the complexity of Gruden’s Las Vegas Raiders offense, coupled with Paul Guenther’s heady defense, the time spent virtually with his team during the offseason on Zoom were valuable. Despite all of that “book work,” nothing teaches new players a scheme better than running through those plays on the field.

“We have to teach fundamentals secondly,” Gruden said. “We have to put guys in their stances. We have to go through all of the fundamental drills that are a big part of the sport.”

Those drills are not something you can do via video conference. With the Raiders taking to the field in walkthroughs and drills this week, the work of blocking through fundamentals to reinforce strong habits to run the team’s scheme is vital.

“Then the third thing is camaraderie,” Gruden said. “No matter what anybody says these Zoom meetings are no substitute for real meetings. We have to find ways to get this team together so they can get to know one another and have some fun playing the ultimate team game.”

This sentiment has been echoed again and again by Raiders players over the past few weeks and how there’s nothing like being in the locker room for a team to bond and connect.

Gruden & Veterans Like What They See in Bryan Edawards

The chatter so far out of training camp has been the impressive play and effort by rookie wide receiver Bryan Edwards. Edwards, a third-round pick from South Carolina, has “jumped off the field” according to my colleague Vinny Bonsignore of Raider Nation Radio 920.

Gruden has been impressed with the rookie despite the lack if real contact or coverage work thus far.

First of all, I think he has some of the best hands that I’ve seen in a long time with the way he plucks the ball out of the air – Raiders WR Nelson Agholor on rookie Bryan Edwards.

“We knew he had the pedigree, he’s the all-time leading receiver at that place,” Gruden said. “But he’s physical, he’s got tremendous hands, he’s a quick learner. He’s a businessman too. He’s not got a lot of other interests other than being a great receiver. He’s a really focused young man. We’re happy to have him.”

His veteran teammates Tyrell Williams and Nelson Agholor had high praise for the rookie as well. That’s not a common occurrence as veterans in the league really want to see young players earn praise with play first.

“First of all, I think he has some of the best hands that I’ve seen in a long time with the way he plucks the ball out of the air,” Agholor said of Edwards. “He’s always aggressive to the point of attack. He’s also quicker than he looks because he’s a big strong guy. He has a really good quick twitch.”

Williams also had kind words about the rookie.

“He’s been awesome. He works hard at really trying to make sure to know what to do,” Williams said. “Like you said, he’s big, physical, runs good routes and he reminds me a lot of Mike Williams from the Chargers when he first came in as a rookie. I think he’s been awesome and I think he’s going to be a great receiver.”

Not only are Las Vegas Raiders fans thrilled with the selection of speedster Henry Ruggs III in this year’s NFL Draft, but his teammates are also already giving the young player kudos for a multitude of reasons.

“Ruggs is dynamic, very dynamic. I don’t think he gets the credit that he deserves for how physical he is either,” former Alabama teammate and Raiders running back Josh Jacobs said. “He’s one of the best blocking receivers that I’ve been around. Obviously, everybody knows he can open the top off on anybody, but he’s very focused. He comes in and uses the same hard work and dedication that he had in ‘Bama and is using here. He just put his head down and worked. I think Ruggs is definitely going to have a big year.”

Williams also was impressed with his speed but also sees the rookie putting in time and understands how his presence will help the entire Raiders offense.

“Early impressions is, dude’s fast,” Williams said. “I think that’s the biggest thing you see. He works hard, makes the plays, when the ball comes to him he makes those catches. He works really hard. I think that’s what we do. And obviously having speed like that, the defense just has to respect and allow when he’s on the field, whether it’s a run play, pass play, you have to have somebody that’s respecting that speed.”